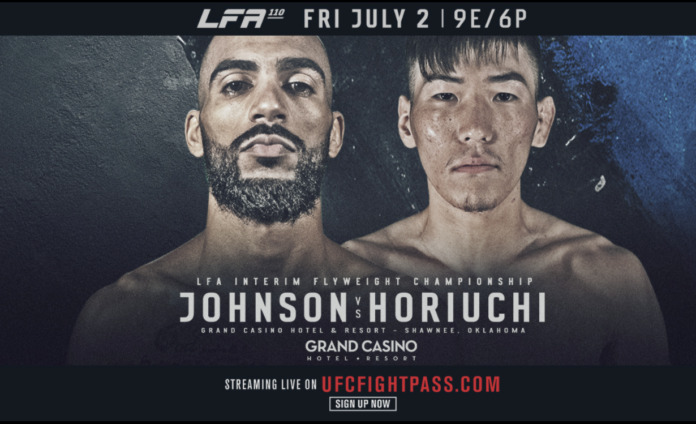 LFA 110 is starting the 4th of July weekend with fireworks of their own.

The only major promotion with an event this week, LFA 110, takes place Friday, July 2, 2021, at the Grand Event Center in Shawnee, Oklahoma, at 9 PM EST. And though LFA canceled the original main event, the event will feature six other exciting fights.

If you’re unfamiliar with LFA, the organization serves as a minor league, so to speak, for UFC and other more significant promotions. Preparing fighters for the next level has proved an exciting and entertaining niche. The promotion currently has a lengthy list of alum that have made a splash in the UFC. Additionally, LFA airs exclusively on UFC Fight Pass, so you can easily catch up on previous LFA events through the app.

The main event of LFA 110 features a flyweight battle for the belt.

LFA titles get routinely vacated, with the LFA serving as a funnel to the UFC. This byproduct of the LFA is precisely why the main event between Charles Johnson and Yuma Horiuchi is happening at LFA 110. The former LFA flyweight champion, Victor “El Magnifico” Altamirano, received the call up to the UFC and vacated the belt.

After losing to current UFC fighter Brandon Royval via unanimous decision at LFA 48, Johnson (8-2) spent a couple of years boxing. He made his triumphant return to the LFA at LFA 100 card, the same event that Altamirano crowned champion. His return victory came via Anaconda Choke in the second round against previously undefeated Karlee Pangilinan.

Across the cage from Johnson, in the main event of LFA 110 will be the first Japanese fighter signed to the LFA, Yuma Horiuchi. Horiuchi dropped down to flyweight after a tough split decision loss in his LFA debut to Leandro Gomes at LFA 81 in the bantamweight division. The move proved fruitful, as Horiuchi made quick work of Dana White’s Contender Series alum Donavon Frelow with a beautiful armbar in his 125-pound debut at LFA 104.

With 75% of their wins coming via submission or KO/TKO, we can expect that Johnson and Horiuchi will put on a show.

The theme for the co-main event of LFA 110 is redemption.

The co-main of LFA 110 features Markus Perez and Christiano Frohlich in the middleweight division. Both men are hungry to get back into the win column.

Perez (12-5) makes his LFA debut after an unsuccessful run in the UFC. Riding a four-fight losing streak, Perez will be looking to turn his career around with a win at LFA 110.

Frohlich, a veteran of the LFA, is also returning to the promotion after a brief stint at RIZN. Coming off a loss at RIZN, Frohlich will step into the cage for the first time since 2019 to face Perez.

Frohlich is looking to get to the UFC, while Perez is looking to return to the UFC. With two fighters looking to turn their records around, it’s almost certain that both men will come into LFA 110 ready to put it all on the line. A win, or more importantly, an impressive win, can right all the wrongs and send either man in the right direction.