The night began with an expectation of history would be made tonight, and while Brian Castano did his part to earn it, the judges had something different in mind.

The fight between champions Jermell Charlo and Castano took place in Texas, which is the home state of Charlo, which may have been overlooked when thinking of the result of this fight. Charlo had his moments here and there throughout the fight, but Castano controlled the center of the ring and was able to be the aggressor for most of the fight.

Castano was able to get inside and close the distance against the bigger Charlo. He even was able to physically wobble him on several occasions but Charlo was able to weather the storm.

Charlo, as previously mentioned, did have several moments where he was able to shine throughout but in round 10 he was finally able to crack the code that was Brian Castano.

He was able to land a counter right that sent Castano wobbling back, and from there he smelled the blood in the water and sent him on the retreat for nearly two minutes of that round.

In Round 11, Brian Castano was able to get his legs back under him, but Charlo refused to let him breathe. Charlo kept on him, and instead of him being on the defensive, he had Castano back peddling and against the ropes while landing strong and meaningful shots.

In the corner between rounds, Charlo’s trainer they emphasized that they thought he needed a knockout to win the fight, as did many ringside observers and people scoring the fight on social media, including myself. I had it seven rounds to four in favor of Castano, so the only way to victory for Charlo was indeed a knockout, or so we thought.

To the Scorecards, We Go…

Round 12 would be back and forth with the last minute having both men landing meaningful shots but not hurting the other man to make a lasting impact on the judges. Everyone thought Brian Castano had done more than enough to earn the decision win over Jermell Charlo in his home state, except the only three people whose opinion mattered on the subject, the judges.

It was a very close fight, especially when looking at the Compubox numbers, and the judges could be given the benefit of the doubt there. However, when the scores were read, Twitter and the arena erupted in disbelief.

Several prominent names in boxing had there own opinions on the matter such as Brian Campbell of Showtime and Morning Kombat. He presents a very important question in regards to not just judging but the sport as well.

Why can't boxing be better than this? #CharloCastano

We have always lived with poor scoring in all combat sports so ultimately nothing will change, it never does. Just like any form of politics, we just get outraged and we move on. If fans can move on from the Timothy Bradley and Manny Pacquiao judging, then we can move on from anything.

Even though we move on, that doesn’t mean we get complacent. When bad scoring happens, we will always point it out, and in doing so Castano gets the recognition he deserves, just in an unofficial fashion.

Where Do We Go From Here?

Both men expressed interest in a rematch to start round 13, but with Jermell Charlo being in the Al Heyman stable, it’s hard to say what will happen.

Charlo and Brian Castano started the night chasing history, but in the end, both men ended up being overrun by poor judging. I could see Charlo defending his belts against someone else to get his momentum and confidence back while Castano does the same.

This won’t be the last we see of these two men as they both proved to be bonafide champions in their own right, now we just need to see who can become an undisputed champion and become a part of the record books in boxing. 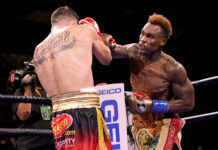