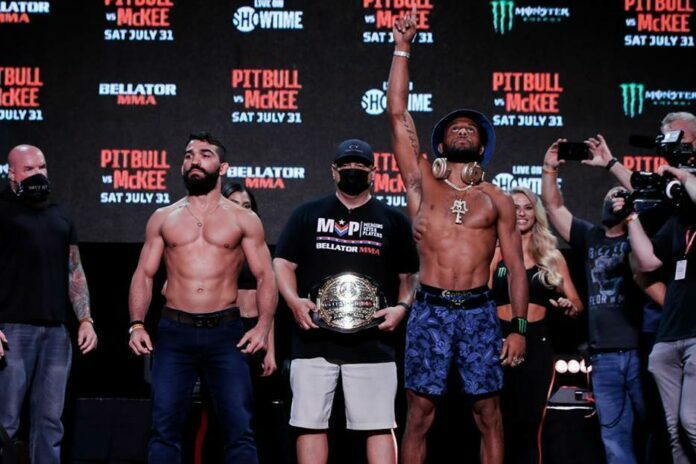 The Bellator Featherweight World Grand Prix comes to a close this evening. And either Patricio Pitbull or A.J. McKee will be walking away with the title and a cool million-dollar prize at Bellator 263. Never has so much been on the line in the sport of MMA which makes this night, and specifically this fight, the biggest moment in Bellator history.

Pitbull enters the fight coming off two impressive wins in the grand prix and is looking to put a stamp on his Bellator career by keeping the hungry contender at bay. Pitbull has been in Bellator for 11 years since making his debut in the Season Two Featherweight tournament under former Bellator CEO Bjorn Rebney. Pitbull has been a part of the long history of Bellator but he has remained a constant and is without a doubt the greatest fighter in its history, a win tonight could put him in a special place in the history of the sport overall after Bellator 263.

Across the cage from Pitbull will be the undefeated contender and future of the division in A.J. McKee. Fighting is in his blood as he is the son of UFC, PFL, and Dream veteran Antonio McKee but he is already on a course for superstardom and has dubbed himself the “Floyd Mayweather of MMA”. McKee has had impressive performances throughout the grand prix and with a win tonight he very well could be on that Mayweather fast track with the Showtime machine behind him.

Before the grand prix finals though, Bellator 263 is a loaded card from top to bottom of the main card. The co-main event between the scrappy Emmanuel Sanchez and Mads Burnell should be a fight from start to finish no matter where it goes, Usman Nurmagomedov looks to keep coach Khabib Nurmagomedov undefeated as he takes on Manny Muro, and we also have Brent Primus going against Islam Mamedov!

Bellator 263 should be a night to remember in sports history.

Follow along with MMASucka as we provide you with Bellator 263 Results throughout the card. Coverage begins with the prelims on Bellator’s YouTube page at 7 p.m. ET/4 p.m. PT, followed by the main card on Showtime at 10 p.m. ET/7 p.m. PT

Usman Nurmagomedov def. Manny Muro via KO (Knee to the Body) at 3:30 of Round 1

Goiti Yamauchi def. Chris Gonzalez via TKO (Strikes) 3:53 of Round 1

Gadzhi Radadanov def. Daniel Carey via TKO (Strikes) at 3:57 of Round 1

Khasan Magomedsharipov def. Jonathan Quiroz via TKO (Strikes) at 4:21 of Round 2

Joshua Jones def. Johnny Cisneros via TKO (Strikes) at 4:15 of Round 2

George Karakhanyan def. Kiefer Crosbie via Submission (Arm-Triangle Choke) at 4:25 of Round 1