“The new superstar of wrestling,” Nenad Lalovic, President of United World Wrestling (UWW), called López Núñez, “If he gets the gold medal this week, he will be the first man to have ever achieved that,” Laloviv said.

In the semi-finals match, Lopez Nunez faced the silver medalist in Rio 2016 and bronze medalist in London 2012, Turkey’s Riza Kayaalp, Which the Cuban defeated 2-0. After the match, these two shared a kiss and a hug.

“He’s not the youngest wrestler out there. But he’s in great form. You cannot see that often, winning in the heaviest category in that age,” Laloviv, President of the UWW, said, “He’s just great.”

On his way to the final, Georgian-born Iakobi Kajaia needed to defeat Chilean Yasmani Acosta Fernández, who was the South American Games Greco-Roman Gold medalist, Finland’s Elias Kuosmanen, who is a two-time European Wrestling bronze medalist, and Russia’s Sergey Semenov, who is a Wrestling World Champion in 2018 and a Rio 2016 Olympic Wrestling Bronze Medalist.

Reuters points out that these four Olympic wrestling gold medals would only be for the men’s category. For the Women’s Japan’s Kaori Icho won four gold medals in women’s freestyle Olympic Wrestling. “We already have a woman who’s done it, so finally a man will equal a woman,” Laloviv, President of the UWW, said.

Adeline Maria Gray, of the USA, will be looking to add an Olympic gold medal to her collection, on August 2. She has not yet earned a medal in the past two Olympics, for which she has qualified. However, she has earned five championships in Women’s Freestyle Wrestling, and she was the first American woman to do so.

This Monday, American-born Adeline Maria Gray will be looking to gain her first Olympic Wrestling gold medal. But it goes through Germany’s Aline Rotter-Focken.

MMA and Olympic Wrestling have much cross-over. Read more about that here. 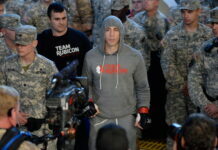