An unblemished path to his fourth gold

Mijaín López Núñez did not concede a single point during the course of his 9-0, 8-0 and 2-0 wins over Romania’s Alin Alexuc Ciurariu, Iran’s Amin Mirzazadeh and Turkey’s Riza Kayaalp, respectively, before his 5-0 victory over Kajaia in the 130kg gold medal match.

Lopez used a gut-wrench and turn to open a 3-0 lead in the final against Kajaia, receiving a step-out point after the break to go up 5-0.

You would think Lopez would have been tired after his match and clinching his fourth gold medal in his fifth straight Olympics, but the great champion showed no fatigue as he picked up his coach and carried him around the ring in celebration.

Mijain Lopez was so hyped to win his 4th straight Olympic gold in wrestling that he CARRIED HIS COACH AROUND THE RING. #TokyoOlympics pic.twitter.com/UPl7Sc0K0S

Prior to Lopez’s historic feat, Aleksandr Karelin had been considered the greatest Greco-Roman and Olympic wrestler of all time, having won three consecutive Olympic gold medals before what could be one of the biggest upsets of all time in his loss to Rulon Gardner in the 130kg final at the Sydney Olympics in 2000.

While Karelin tallied an unfathomable nine world championships, compared to Lopez’s five, the Russian Bear’s three gold and one silver Olympic medals are no longer the greatest achievement in the sport.

Lopez and Karelin fought at slightly different times, but that hasn’t stopped wrestling fans from imagining a fantasy match up between the two legends, which of course has been discussed on Reddit.

While many had previously considered Karelin the greatest Olympic wrestler of all time, Japan’s Kaori Icho won four gold medals in Olympic freestyle wrestling in 2004, 2008, 2012 and 2016, tying her with Lopez for most Olympic gold medals in wrestling. 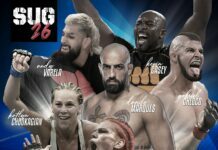 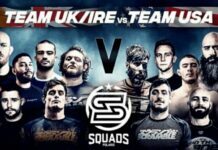 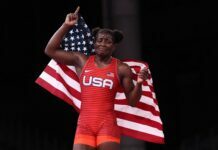