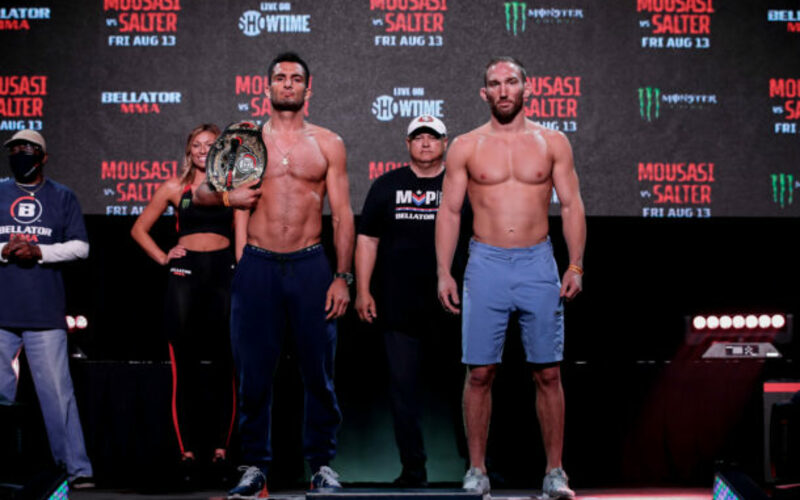 Bellator 264 takes place tonight at the Mohegan Sun Arena in Uncasville, Connecticut. The prelims begin at 7:15 PM ET/4:15 PM PT and can be viewed on YouTube, while the main card kicks off on Showtime at 9:00 PM ET/6 PM PT.

The Bellator Middleweight Championship will be contested as defending champion, Gegard Mousasi takes on John Salter in the main event. It will be the first defense of Mousasi’s second reign of the 185lb title, after Mousasi defeated Douglas Lima for the vacant title last October. Tonight’s title shot has been a long time coming for the Alabama native Salter, who has won eight of nine Bellator appearances and has only been to a decision once in his 22-fight career.

In the co-main event, former welterweight champion Andrey Koreshkov will take on Sabah Homasi. Koreshkov returns to the Bellator cage after a two-year hiatus from the promotion against the tenth-ranked Homasi, who looks to rebound from a TKO loss to Paul Daley in April. In what may be the most intriguing bout of the evening, bantamweights Magomed Magomedov and Raufeon Stots will compete in the featured main card bout in what appears to be a title eliminator in the 135lb division. A battle of two undefeated heavyweights will also take center stage at Bellator 264 as Davion Franklin competes against Everett Cummings.

In the Bellator 264 preliminary card headliner, former Invicta FC featherweight champion Pam Sorenson makes her Bellator debut as she faces 2019 PFL lightweight season competitor Roberta Samad. The fight will be the first in over two years for both of them.

Gegard Mousasi def. John Salter via TKO (Ground and Pound) at 2:07 of Round 3

Davion Franklin def. Everett Cummings via TKO (Strikes) at :21 of Round 1

Jon McNeil def. Orlando Mendoza via TKO (Ground and Pound) at 3:57 of Round 3