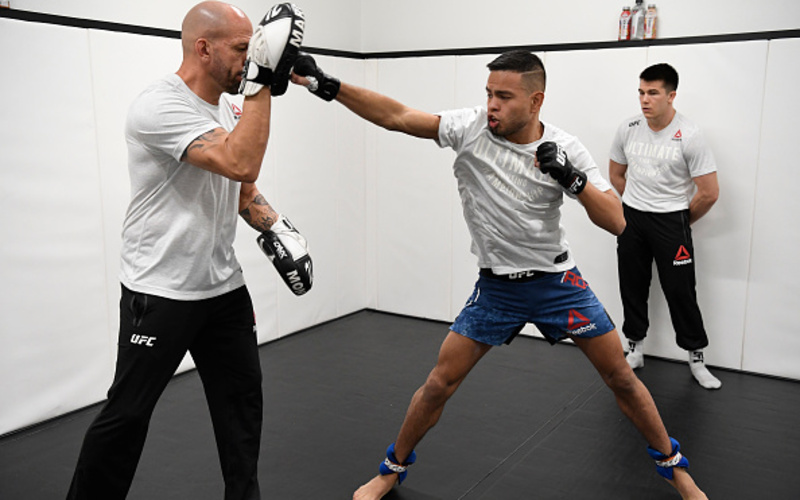 Despite only holding a 2-1 record in the UFC, Brandon Royval has already earned the respect as a flyweight mainstay. A former LFA champion, Royval trains at FactoryX Muay Thai in Denver under Marc Montoya. He holds a BJJ black belt and has finished eleven of his twelve pro wins, the majority coming by submission.

Royval is everything MMA fans love about flyweights. He’s scrappy, fast, and pushes a bruising pace. Although his aggression can leave openings for his opponents to exploit, he throws lengthy combinations and moves laterally well. The gas tank has never been an issue in his UFC fights, which is typical of the athletes who train in Colorado altitude.

What really stands out for Royval is his use and mastery of the scramble. A talented scrambler knows how to move not just to end in a dominant position, but to set up attacks. Brandon Royval has an ungodly talent at setting up submissions while the world is still spinning in the scramble, ending with a deadly attack already locked in.

His UFC debut against Tim Elliott was a whirlwind of submissions, but Royval declared checkmate when he gained the full mount, took the back of Elliott, then back to mount, back while making that full transition, he was trapping the arm of Elliott so that he landed in an arm triangle choke. He got the tap on just a week’s notice.

He used the same talent against Kai Kara-France, rolling to omoplatas and heel hooks before jumping to the fight-finishing guillotine choke in round 2. Pantoja may be a good grappler too, but he’ll have to keep up with Royval’s speed.

Unlike Brandon Royval, Alexandre Pantoja is a longtime staple of the flyweight division. He was a favorite to win the Ultimate Fighter season 24, which featured flyweights competing for a shot at the UFC belt. Despite falling to Hiromasa Ogikubo in the semifinals, Pantoja has remained in the top 10-ranked flyweights for most of his tenure.

On the feet, Pantoja is patient in his approach. He likes to get reads on his opponents by persistent touches and feints, while consistently controlling the centre of the cage. Once he’s laid traps, he set up his bigger weapons. Some go-to weapons for Pantoja include the teep kick to the mid-section and the overhand right.

Against Wilson Reis, Pantoja used leg kicks and the teep to lower Reis’ hands just enough to land the overhand right in round one. The right octane kicked in for Pantoja, who dropped Reis and finished him with punches.

On the mat, Pantoja is one of the most formidable in the division. A longtime Brazilian Jiujitsu black belt, the majority of his wins come by way of submission. He’s not only powerful on top and on the back, but off of his back as well. Against fellow grappler Ulka Sasaki, he threatened with arm bars and triangle chokes from his back until he scrambled to Sasaki’s back for the rear naked choke finish. Royval has to be ultra careful if the fight goes to the floor, even if he feels like he’s in a dominant position as Pantoja can sweep from any position to turn the tide in his favor.

The contrast of pacing between these two flyweights will likely give way to the more rapid worker, which is Royval. Royval will likely charge Pantoja who will struggle to maintain control of the striking like he often does. Pantoja would prefer to pick his shots and make Royval miss, and that teep kick could be a cornerstone in halting the forward pressure of Royval. While Pantoja is the more accurate, powerful striker, Royval is the more voluminous.

Another likely reaction of Pantoja to Royval’s is that he times the takedown as Royval surges forward, as he’s been able to hit multiple times on hyper-aggressive adversaries. If the fight hits the mat, Pantoja could struggle with the speed of Royval. Since both are BJJ black belts, expect plenty of momentum shifts.

How Pantoja attempts to corral the momentum of Royval will be the deciding factor of this fight. The likeliest outcome is that it goes to a decision, with potentially each fighter securing rounds with the judges. If Royval wins, there’ll be a new fresh face among the flyweight top five, but if Pantoja wins, a good chance he gets matched up against champ Brandon Moreno on a PPV in November or December.

Alexandre Pantoja vs. Brandon Royval is the first fight on the main card of UFC Vegas 34, which airs on ESPN and ESPN+ in the US at 10pm ET/7pm PST on Saturday evening.