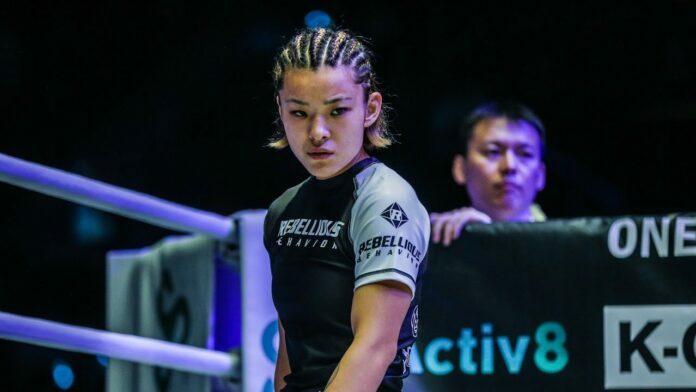 The highly-anticipated ONE Atomweight World Grand Prix will begin on Friday, September 3, with the four quarterfinal matchups. ONE Championship brings a stacked all-female card to the masses, entitled ONE: Empower.

Two rising stars in the sport will collide when Itsuki Hirata takes on Alyse Anderson.

Itsuki Hirata is one of the fastest-rising stars in Japan. The undefeated Japanese athlete has a perfect 7-0 record with seven career finishes. Although she began with five straight submissions, Hirata has finished her past two bouts by TKO.

The Japanese standout continues to add to her game and improve. The addition of ground and pound while controlling her opponents will only make her more of a threat to finish a match. She can utilize her weapons to move her opponents into a more dominant position.

“Strong Heart Fighter” is also one of the most charismatic entrants into the tournament. Hirata dances her way into the Circle and even plays to the crowd when in battle. The 21-year-old has supreme confidence in her abilities, and the tournament will test her strengths like never before.

Anderson will be the first to try and knock off the talented grappler.

The 26-year-old American will be making her ONE debut against a successful campaign in Invicta FC. “Lil’ Savage” has a long career in martial arts as she trained karate at an early age with her father, but since transitioning into mixed martial arts, she utilizes a complete skill set.

Anderson has showcased her striking and ground and pound, but she has also flashed brilliance with her submission game. Hirata will also have to be mindful of the American’s guard should she score a takedown.

The Michigan native is the most versatile athlete that Hirata will have competed against to date. Anderson has a solid grappling base herself and will also try to utilize her striking as one of the tallest athletes in the division.

Will Anderson try to utilize her size and reach to keep Hirata on the outside, or will she close the distance and accept a grappling battle? Anderson’s game plan entering the match will play a crucial role in how it plays out because everyone knows Hirata will want to bring the action to the canvas

Every opening-round matchup is compelling in its own right. However, the Hirata-Anderson bout brings a little extra spice to the table featuring two of the hottest up-and-coming athletes today and guaranteeing the winner a spot in the semi-finals.

There is a lot to love about ONE: Empower, and the card that will take place on September 3, but the quarterfinal contest between Alyse Anderson and Itsuki Hirata is, without a doubt, one of the premier bouts on the card that fans will want to make sure they check out.