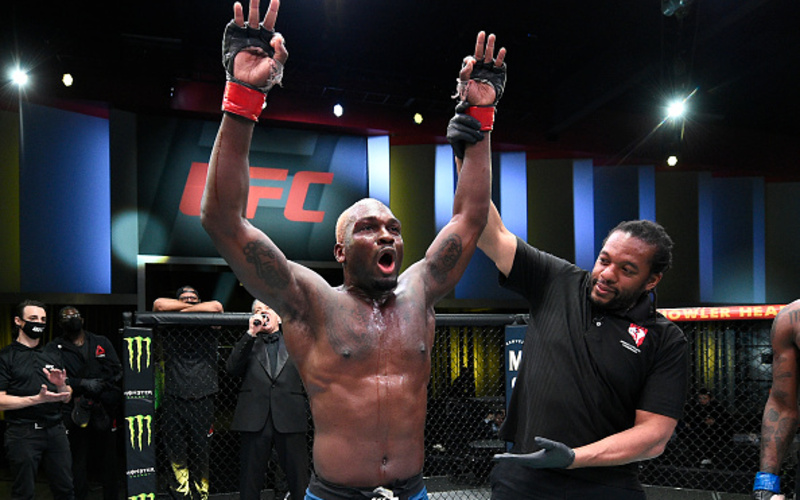 Derek Brunson will be looking to show he is more than a gatekeeper against Darren Till who wants to establish himself as a middleweight contender in the main event of UFC Vegas 36 this Saturday. Here we discuss the odds and analysis from a betting perspective.

Derek Brunson may be on the wrong side of thirty for someone who we might expect to be contending for a UFC middleweight championship, but you wouldn’t know it based on his recent performances which suggest he has no plans on slowing down any time soon.

Brunson has a one inch height and two inch reach advantage over Till, averaging 3.45 strikes (significant) landed per minute (SLpM) with 47 percent striking accuracy, with 2.72 strikes absorbed per minute (SApM) with 53 percent striking defense, 3.11 takedowns per 15 minutes with a 33 percent takedown accuracy, 94 percent takedown defense and 0.5 submissions per 15 minutes, according to UFC Stats.

Darren “The Gorilla” Till is the most hyped prospect to come out of England since Michael Bisping but he will need to beat Derek Brunson to take his record as a UFC middleweight above .500 and to be considered a contender for the title.

The Gorilla has two wins and three losses in his last five fights. In his last two fights at middleweight, Till has a loss to Robert Whittaker (UD, 2020) and a win over Kelvin Gastelum (SD, 2019). Before moving up to middleweight, Till had losses to Jorge Masvidal (TKO Rd2, 2019) and Tyron Woodley (sub Rd2, 2018) and a victory over Stephen Thompson (UD, 2018).

Derek Brunson vs. Darren Till Narratives

Derek Brunson is the bigger man with superior wrestling and more experience in the Octagon, whose losses have come against tougher competition.

Darren Till backers feel Till has higher level feints, striking and cardio with tougher recent competition and that Brunson has a questionable chin that will make him susceptible to getting knocked out by Till on Saturday.

The argument against Brunson’s superior wrestling in this matchup is that Till’s strength and takedown defense will prevent Brunson from doing anything meaningful with a takedown, thereby neutralizing Brunson’s strength. Some might also use MMA math to point out that while Till fought Whittaker competitively to a decision over five rounds that Brunson got smashed and finished by the former champ in the first round.

Derek Brunson vs. Darrel Till Prediction

Besides the age discrepancy and the significantly different result to the common opponent Robert Whittaker, we are struggling to understand why Till is almost a two to one favorite against Brunson. While Till started strong against and rocked Whittaker a few times, we feel that Whittaker might have started slowly and had some rust in their contest, as it was Whittaker’s first fight after taking a break following his title loss to Adesanya.

Tyron Woodley’s most recent, and possibly final, victory in the UFC came in a second round finish against Darren Till and after the world witnessed Woodley clearly get beat in a boxing match against Jake Paul, the Gorilla’s loss to Woodley has not aged well.

Brunson’s UFC losses have come against Adesanya, Whittaker, Ronaldo Souza and Yoel Romero, all of whom are either former UFC champs or contenders or future UFC hall of famers. He is the bigger man with superior wrestling and takedown defense, higher striking volume and more efficient striking differential and more finishes in the UFC than Till.

Maybe like last week when everyone pointed to the difference in experience and strength of schedule in picking Edson Barbosa over Giga Chikadze, the bookmakers may know something that the general public does not, enticing the masses to avoid the fairly heavy juice on Till to take the plus money on the more experienced Brunson because they know that the house will win.

Darren Till closed as a -275 favorite against Masvidal and got knocked out, he closed as a slight favorite (-115) to Tyron Woodley and got submitted, he was a -145 favorite to Nicholas Dalby and fought to a draw, and Till has not had significant success as a favorite against quality competition, as he was an underdog in his victories against Gastelum, Thompson and Donald Cerrone.

On the flip side, Brunson was a +155 underdog to Kevin Holland before beating him, a +285 underdog prior to his win over Shabazyan, a +130 underdog prior his win over Heinisch, -111 to Theodorou’s -115, all of which indicate a trend of Brunson being undervalued in his recent wins.

While Till could very well be the right side and end up knocking out Brunson on Saturday night and the UFC could very well prefer Darren Till being successful at this stage of his career then Derek Brunson extending his, we feel that Till is overvalued and Brunson undervalued with this line. While we never feel good about taking a trendy underdog, we still cannot justify picking Till in this spot at that line and see all the value on Brunson.