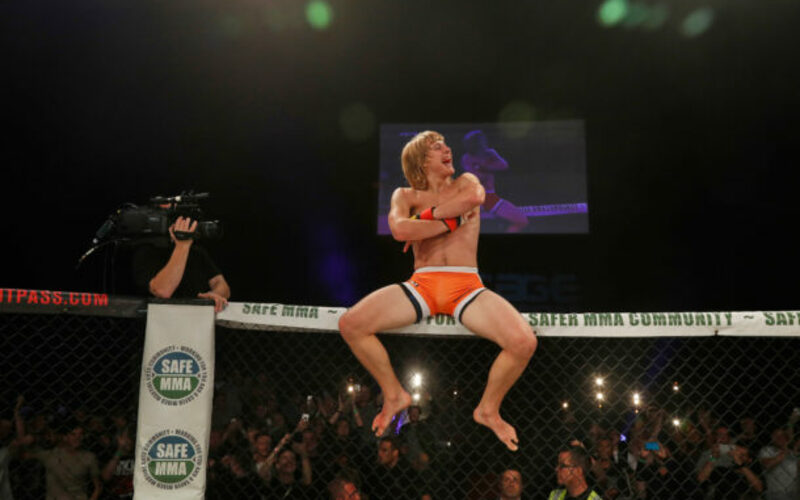 If UK MMA fans have been patient for “The Baddy’s” UFC debut, former Cage Warriors star Pimblett has been even more patient. Offered a UFC contract in 2016 and 2018, he turned them down to allow his MMA game to develop and physique to mature. The decision likely saved Pimblett a few tough losses in the big show, and now that he’s firmly outgrown the UK MMA scene, he’s ready for primetime.

Everything about Pimblett screams entertainment. From his diverse offensive fighting style, to his penchant to play to a raucous crowd, Paddy is everything the UFC wants in a fighter. It’s a shame he’ll have to make his debut without a local crowd, but fortunately, he’ll likely be around long enough to play his fair share of home games.

Training out of Next Generation MMA Liverpool- the same factory that forged Molly McCann, Chris Fishgold, and Cage Warriors champion Matthew Bonner– Paddy is one of three Scousers (Liverpool natives) on the card on Saturday.

What stands out about Pimblett’s game is his ability to blend the various phases and segments of a comprehensive MMA game, to the tune of a pace that is wild for opponents but controlled for him. Whether it’s a counter flying knee to punches and a takedown, or constantly rolling for submissions through scrambles on the mat, Paddy carefully wields the weapon of chaos. “The Baddy” has two finishes by flying triangle choke, which should tell you plenty about Pimblett’s relentless search for finish at every moment.

While Paddy is dangerous at any stage on the feet, his sweet spot is in the positions of total control on the ground. A Brazilian Jiu-Jitsu black belt, Pimblett can snatch the back through scrambles and even the clinch, and keeps an airtight vice as he searches for the rear naked choke.

Alternatively, Paddy often switches to throw heavy strikes from the back or by transitioning from the back mount to full mount, owning several TKO finishes from mount or from the back. Twelve of his sixteen wins come by finish, with seven by submission and four by strikes.

Competing in his fourth UFC fight, Brazilian Luigi Vendramini holds a 1-2 record in the Octagon. After a horrendous debut against Elizeu Zaleski dos Santos, Vendramini rebounded on Fight Island last October against Jessin Ayari with a first round finish of Jessin Ayari. As soon as he caugh Ayari with a left hook, the killswitch flipped on and he sprung with rapid-fire punches and a head kick that sealed the deal.

Although he dropped a close decision to Fares Ziam last June, he scored a 10-8 third round against Ziam that gave him a draw on one scorecard. In that bout and his other UFC fights, Vendramini has a habit of extremes- either he hangs back too much with his back against the cage, or his killer instinct maxes out when he smells blood. His measurement of distance when gunning for the finish is well-placed and allows him to set up finishing blows.

Training out of FactoryX Muay Thai in Denver, Colorado, Vendramini opts to fight standing rather than utilizes his Brazilian Jiujitsu black belt on the ground. He does a good job at getting a full extension of his punches, fighting long and transferring his power to the end of his hands. His killer instinct might be his best asset, keeping space tight between him and his opponent and punches firing like a jackhammer.

This is a matchup tailor-made for Pimblett to introduce himself to worldwide MMA fans, as it was intentionally crafted to take place in front of UK fans before the event was moved to the UFC Apex in Las Vegas. Vendramini is likely to struggle with the energy and pressure of Pimblett. Those who have had success against Paddy in recent fights have matched his aggression with extended, looping punches and timed takedowns. The strategy concocted by Marc Montoya and FactoryX for Vendramini will have to exploit Pimblett’s wildness and turn up the pressure usually seen from Vendramini.

A likely scenario for the fight is that Paddy drills Vendramini on the feet, and follows him to the floor to finish by strikes. The fight could get interesting if Luigi stands his ground during a Pimblett blitz and tries to counter, dishing out a blitz of his own. Luigi is one of the better grapplers that Paddy has faced, so Paddy may have work a little longer or do a bit more damage if he wants to get the tap by rear naked choke over Vendramini. At 5’8, Luigi is an undersized lightweight, which doesn’t pair well with his lack of pressure.

UFC debuts of big prospects are often a mixed bag, and the lack of a crowd further complicates Pimblett’s debut. His experience on big shows and in crowdless arenas should have prepared him for a level-up in competition, so look for a vintage “Baddy” performance here against Vendramini as he overwhelms and gets the finish in the first round, likely by strikes on the ground.

How To Watch– Paddy Pimblett vs. Luigi Vendramini is the first bout of the UFC Vegas 36 main card, which airs on ESPN+ in the US at 4pm EST / 1pm PST.