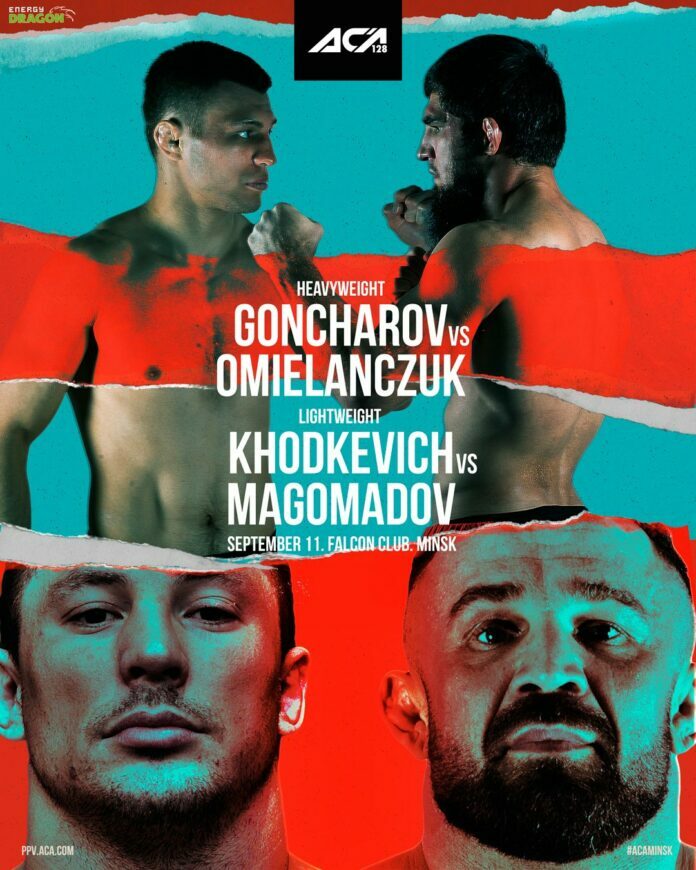 Live from the Falcon Club Arena in Minsk, Belarus will be ACA 128. Absolute Championship Akhmat (ACA) is a Russian MMA organization, which is broadcasting ACA 128 live this Saturday, September 11, 2021. ACA 128 features several MMA bouts, including a heavyweight showdown in the main event.

In the heavyweight main event, ACA 128 will have two streaking and experienced MMA fighters. Evgeny Goncharov vs Daniel Omielańczuk in the heavyweight event finale will have a combined 54 MMA bouts. Each combatant is coming off unanimous decision wins in their most recent fight.

Goncharov, a Russian-born fighter, has a record of 15-3 and was previously the ACA heavyweight champion. He lost his championship to Mukhamad Vakhaev in 2020. Since then Goncharov has defeated Anton Vyazigin and now at ACA 128, he will be looking to continue the trail back to his title. The ACA heavyweight title he originally defeated Tony Johnson Jr. to gain the championship.

Polish MMA fighter Omielańczukis is 25-10-1 overall however is 7-2 in his last 9 bouts. Impressively Omielańczukis has finished most of his bouts with 16 coming by way of stoppage, 6 via KO/TKO, and 10 via submission. He is also ranked at #2 officially in ACA rankings. He is a one-time heavyweight title contender and at ACA 128 he will look to be battling back to the title.

“The Khan of Gudermes” Viskhan Magomadov will also be making his return to ACA and facing off against undefeated Belorussian Ilya Khodkevich. In their most recent bout, each fighter will be coming off a win in ACA.

Magomadov (9-4), of Russia, and Khodkevich (7-0) will each be looking to continue their win streak. Khodkevich is often a dominating, smothering fighter. Magomadov is willing to brawl and will often seek slam takedowns.

An MMA middleweight showdown will also be taking place on ACA 128 with Russian Azamat Bekoev (12-2) will fight Rafal Haratyk (14-4), of Poland. Both fighters will be looking to continue their win streaks in ACA.

Also at middleweight will be American Chris Honeycutt (12-4) versus Arbi Agujev (26-10), a very experienced MMA fighter. Honeycutt is a former Bellator fighter and competed in NCAA D1 Wrestling. His opponent, Agujev, impressively has fifty-four percent of his wins by way of submission. Both combatants will be coming off a loss in their last bout and will be fighting hard to get back in the win column.

Another lightweight bout at ACA 128 will be “The Miner” Aurel Pîrte (23-11), of Romania, who will face off with Russian Musa Khamanaev (18-7). Khamanaev in this fight will be looking to break his losing streak while simultaneously break the win streak of Pîrte.

Khamanaev is likely best known by MMA fans for having a win over The Ultimate Fighter Season 8 winner Efrain Escudero. His opponent, Pîrte will be looking to continue his win streak and make it four in a row. Additionally, Pîrte has 11 wins via submission and is ranked #5 officially in ACA rankings. “Cry in the dojo, laugh on the battlefield” is the slogan of the Romanian Aurel Pîrte.

The under-card of ACA 128 will feature 10 MMA bouts. Most notably, undefeated Belorussian Vladislav Yankovsky (7-0) will put his unblemished record on the line against Ukrainian Vadim Shabadash (9-5). This will be a middleweight contest.

Brazil will represented at ACA 128 with Miguel Felipe Bunes da Silva (10-5) fighting “Hulk” Mikael Silander (20-8) of Finland in a Flyweight fight. Polish Bartosz Lesko (10-1) will be looking to continue his win streak against Ibragim Magomedov (7-1), of Dagestan, Russia.

Submission specialist “Iron Capture” Alexander Butenko (51-17-3), of Ukraine, will look to add another win to his record against Lithuanian “Silent Assasin” Mindaugas Verzbickas. This fight will be a Welterweight fight. Butenko has 28 career wins via submission. His opponent, Verzbickas is coming off a win in his most recent ACA bout and will be looking to continue his streak.

ACA 128 will be broadcast live from the Falcon Club Arena in Minsk, Belarus this Saturday, September 11, 2021. For viewing information please consult with the ACA website for broadcast details.