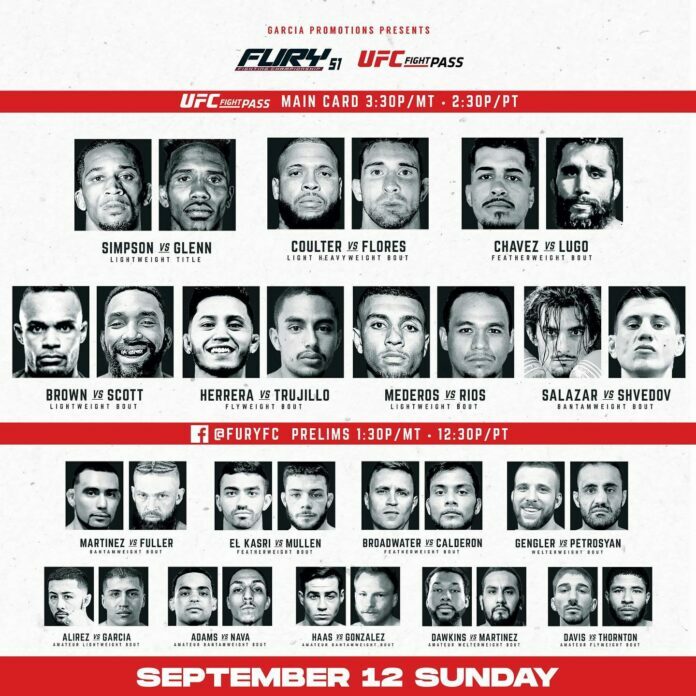 Fury FC 51 will take place this Sunday the 9th at the National Western Complex in Denver, Colorado. The main event will be Le’Ville Simpson defending his FFC lightweight title against Kenneth Glenn. The co-main event will be former UFC heavyweight Rashad Coulter taking on Ty Flores. The featured bout on the card will be a featherweight bout between Edwin Chavez and Ben Lugo. The prelims will be broadcasted on the Fury FC Facebook page and will start at 12:30 pm ET. While the main card will be shown on UFC Fight Pass and will start at 2:30 pm ET.

Le’Ville Simpson will be making his first title defense this weekend in his hometown of Denver, Colorado. He has a professional record of 10-5 finishing six of those 10 wins. Three of his five losses are by decision. One of which was against Harvey Park back in 2018. Simpson is 1-1 in the Fury FC cage after losing his FFC debut to Will Morris by submission back in 2019.

His opponent, Kenneth Glenn has a professional record of 9-7 but he is currently 1-2 with FFC. He is riding a two-fight losing streak at the moment after losing decisions to Kolton Englund and Nico Echeverry. Glenn has finished seven of his nine wins but was also knocked out in four of his seven losses.

The co-main event will feature former UFC heavyweight Rashad Coulter who went 1-3 in his time with the UFC. His only MMA fight after his UFC run was a TKO loss to Ike Villanueva at Fury FC 40 back in 2019. In June of 2021, he had a Muay Thai bout against Joel Guzman but lost by decision. Coulter has knocked his opponent in eight of his nine wins. He has also managed to be knocked out in four of his five losses.

Coulter will be going up against Ty Flores at Fury FC 51. Ty Flores lost a decision to Dustin Jacoby at Dana White’s Contender Series last year. Since then, he knocked out Larry Crowe at Fury FC 46 back in May. Flores has been knocked out in two of his three losses and will come into this fight with a three-inch height advantage, although he will be giving up three inches in reach against Coulter. This will also be a home game for Flores as he trains out of Elevation Fight Team in Denver.

This week’s featured fight for Fury FC 51 will be 5-1, Edwin Chavez taking on 5-4, Ben Lugo. Chavez has fought twice for Fury FC racking up a 2-0 record with the company. He also had three fights and went 2-1 in LFA. In his most recent fight, he won a decision over Gabriel Macario. Three out of his five wins are by decision. Chavez’s opponents have a professional record of 21-14. Only once in his career has he fought someone making their professional debut.

Lugo comes into this fight losing his last one by a decision to Natan Levy at LFA 88 back in August of 2020. Lugo’s professional opponents have a combined record of 23-16. Most of those fights coming from Josh Huber who Lugo fought in his second professional fight. Huber has a professional record of 18-10. Lugo also fought someone making their professional debut in three of his first four fights.