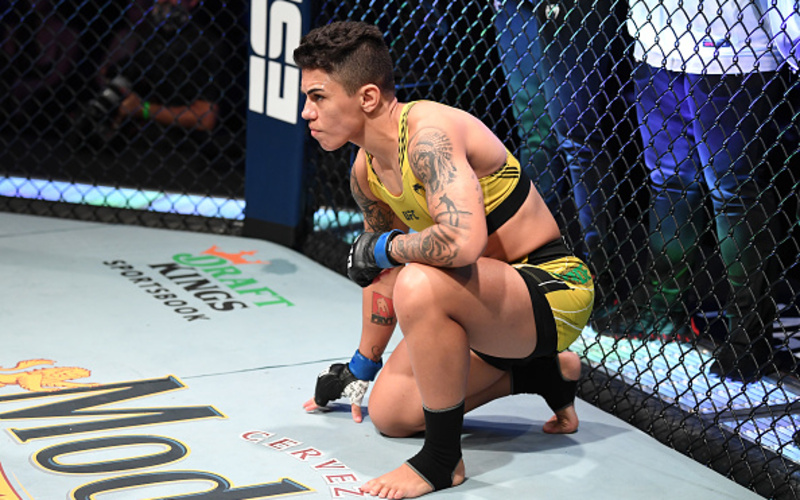 Two contrasting paths meet at a crossroads fight in the pivotal Jessica Andrade vs. Cynthia Calvillo flyweight fight at UFC 266 in Las Vegas. Read below for a full technical breakdown of how these contenders match up, as well as an official prediction.

A Tale of Two Flyweights

While both Jessica Andrade (21-9) and Cynthia Calvillo (9-2-1) have been around the UFC since before the flyweight division began, and this is each their third outing at flyweight, the similarities end there. Andrade is coming off of her third failed title fight, while Calvillo has yet to challenge for one.

Andrade is trying to ascertain if she is stuck just below the championship level at this stage of her career, or if she has what it takes to be a champion again (two of her three most recent fights are losses against current champs Rose Namajunas and Valentina Shevchenko).

Calvillo has long been pegged as a potential title challenger, but she’s struggled against much bigger opponents who can outwork and outmuscle her. Her last fight was a decision loss to Katlyn Chookagian, who was able to stuff her takedowns and use her range to outstrike her. Now in Andrade, she gets to face a former champion. If she beats her, it wouldn’t be surprising if they threw her at the champion in a desperate attempt to find fresh competition for Shevchenko.

Frequently training in California with Team Alpha Male and American Kickboxing Academy, Calvillo has been living in Las Vegas this year, spending time at Xtreme Couture, 10th Planet BJJ Las Vegas, and the UFC Performance Institute. Her time in California with such proficient wrestlers shows in her fights, as her wrestling is her greatest strength. It’s not that she particularly has the quickest shot, but it’s her timing and versatility that provides a high probability that she’ll get the fight to the ground.

Calvillo has a guiding sense of adaptability. When her initial takedowns fail, she keeps driving, finding greater success on the second and third attempts. On the ground, her sweet spot is the back. Of her three UFC finishes, all three are rear naked chokes. She uses her flexibility to take the back from a myriad of positions and adjusts to her opponent’s offense well.

Standing, Calvillo isn’t the most dangerous striker, but she has developed just enough tools to remain competitive with most of the elite. Her swift head movement was on display in the Jessica Eye main event fight last year, slipping most of Eye’s jabs and responding with her own quick jabs and left hooks. Calvillo has developed past a single punch striker and regularly puts together two or three punch combinations, landing with the second and third punch at a high clip.

By far the stronger fighter, Andrade packs a ridiculous amount of athleticism into a 5’1″ frame. Despite being one of the shortest fighters at flyweight and strawweight, her aggression fills in the distance gap against taller fighters. Her footwork and positioning are among the best in all of women’s MMA, setting her up as one of the all-time leaders in knockouts.

Andrade’s athletic drive extends across the full range of her game, from her lights-out left hook to defensive wrestling. Although her loss against Valentina Shevchenko was a shut-out defeat, Andrade was able to stand back up to her feet over and over until she got locked under Shevchenko’s crucifix position.

Like many Brazilian fighters from the Chute Boxe and Vale Tudo lineage, Andrade displays brutality unlike any other in the division except the champion. She will be the stronger fighter in this fight against Calvillo, and although she’s still the shorter fighter, the reach and height disadvantage will be the smallest she’s dealt with in a long time.

On paper, this is a tough matchup for Calvillo. While she will enjoy a slight height and reach advantage, Andrade’s aggression and ability to counter larger athletes may well neutralize that comfort. While she’s never been finished, Calvillo has never faced a woman with the firepower of Andrade. She can try to work off her jab, but eventually, Andrade is likely to counter and catch her with hooks when she does so.

Calvillo’s best path to victory is to try and wrestle and take the back as soon as possible. Such a strategy will have to be relentless, with the long-term in mind. If she makes Andrade work, she could take a decision. Jessica will likely work her way out of the takedowns and return to the feet again and again.

All Andrade needs to do is box Calvillo. Calvillo’s footwork vs. Andrade’s will likely see her trapped in a corner or in the clinch, where Andrade can land combinations to hurt and bust up Calvillo. As early as the end of the first round, don’t be surprised if Andrade finds her full timing and puts away the Californian, who will have run out of options.

Prediction: Jessica Andrade def. Cynthia Calvillo via TKO in round 1

How to Watch: Jessica Andrade vs. Cynthia Calvillo is the PPV opener for UFC 266. The PPV can be purchased exclusively on ESPN+ in the U.S. and airs at 10 p.m. EST / 7 p.m. PST.