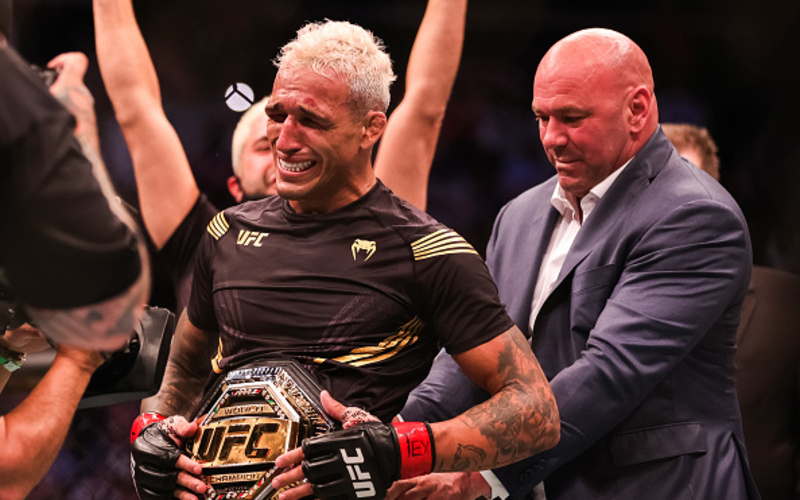 “Do Bronx” Charles Oliveira won the vacant lightweight title by knocking out Michael Chandler at UFC 262 in May of 2021. Oliveira is currently riding a nine-fight win streak in the UFC’s lightweight division and along the way defeated Tony Ferguson, Kevin Lee, Jim Miller, and others. In an interview with MMA Sucka Oliveira had predicted that he will fight Poirier in December.

Charles Oliveira was raised in a poverty-stricken neighborhood of Brazil, the Favela. Early in his life, he helped support the family by assisting his mother with selling cheese salads from a trailer, according to BJJ Heroes. At the age of 12, only eight years before his UFC debut, Oliveira began training Brazilian jiu-jitsu. Before his MMA debut, Oliveira won world submission grappling championships in blue-belt competition in his own and absolute weight, plus South American purple-belt tournament champion. He is currently a third-degree black belt.

“A guy from the favela, from the community, is taking over the world.” Charles Oliveira said. He’s fighting to make his community and family proud.

“The Diamond” Dustin Poirier, of Lafeyette, Louisiana has had an incredible year. His hot sauce brand is taking off along with his charity organization “The Good Fight Foundation.” In 2021 Poirier defeated Irish fighter, and former double Champion, Conor McGregor at UFC 257 and UFC 264.

Poirier, former interim champion, is ranked number one in this division and had a previous title shot against then-champion Khabib Nurmagomedov. In his only title shot, Poirier lost to Nurmagomedov lost via submission at UFC 242, in 2019. Now, Poirier is on a winning streak in this weight class and has defeated Max Holloway, Eddie Alvarez, Justin Gaethje, Dan Hooker, and others in his career. At UFC 269 on December 11 Poirier will have another chance at UFC gold.

Dustin Poirier nearly left MMA as a whole at one point but was encouraged by his supportive wife Jolie Poirier. “What’s beautiful though, my wife’s been there since the first fight…If I ever thought about stopping, she is the one who said ‘You Can’t!’” Poirier recalled.

This fight will be scheduled for December 11. This was after Dustin Poirier confirmed the fight contract is signed on Twitter, saying “Signed, Sealed, Delivered.”

“The matchup had been in talks for weeks, and Poirier told ESPN late last month there was “a good chance” it would happen.” ESPN reported, and added, “Representatives for Poirier confirmed to ESPN he has officially agreed to the December title fight.” No word yet on venue or location at this time. The UFC officially and Oliveira has also not said anything as of yet.

Also at UFC 269 will be former Bantamweight champion Cody Garbrandt making his debut at Flyweight against Kai Kara-France. Garbrandt told MMA Junkie, “There’s so many unanswered questions that it scares me and motivates me in the sense of doing the extra. Not that I haven’t in the past, but it’s more. You have to add more onto it, then figure it out. So I think that this will be a great weight for me. My energy levels feel good. I’ve been on a diet for about two months now, so I’ve already shaved off five to seven pounds, give or take. I’m feeling good.”

Stay tuned at MMA Sucka for more MMA news and updates regarding UFC 269.