5 Things to Learn From Bellator 268 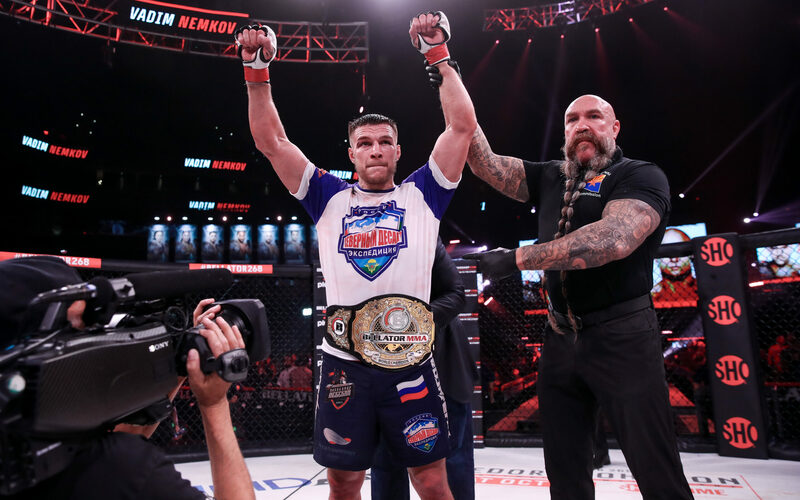 Bellator 268 took place this past Saturday at the Footprint Center in Phoenix, Arizona. The night was capped off with a Light Heavyweight World Grand Prix Semifinal matchup between champion Vadim Nemkov and Julius Anglickas. With so much action across nearly every weight division, here are just five things we learned from Saturday’s bouts.

5 Things to Learn From Bellator 268

Javier Torres is not a household name in MMA; however, it’s going to be hard to forget the heartfelt performance from the Mexican middleweight on Saturday. In his preliminary matchup against Gregory Milliard, Torres entered the matchup with an 11-5 record professionally with one previous win under the Bellator banner.

Finding early success in rounds one and two, Torres faced some adversity in round three. At the final bell, the judges’ scorecards were called upon. Torres, dawning a luchador-style mask and removing his gloves, went to the center of the cage to hear his name announced one more time in victory.

Bellator 268 saw a lot of impressive performances. Considering this, it would be remiss not to mention Sumiko Inaba’s incredible flyweight performance against Randi Field. The pair of flyweight competitors entered the contest as perfect professionals, both boasting a record of 2-0.

From the opening bell, Inaba blitzed in with precise, scoring shots. Her offense was not met without recourse as Field landed in significance to her own right. The 115 lbs-ers looked even through three and a half minutes until Inaba landed a clean right hand. Sensing she had hurt her opponent, Inaba bounced on Field and pressured her into the cage through the closing bell.

At the starting bell of round two, Inaba stalked Field and landed at will. The fight eventually made its way to the mat, where Inaba secured a technically perfect arm-triangle choke. Now 3-0, Inaba undoubtedly put the flyweight division on notice.

In perhaps the most daunting fight of his career, Brent Primus squared off against hometown favorite Benson Henderson in a 155-lb. matchup. The fight was competitive, but Primus shined throughout the 15-minute matchup. Going to the judges’ scorecards, Primus earned a unanimous decision victory (29-28, 30-27, 30-27), upsetting the hometown favorite and handing him his third loss in a row.

This fight proved incredibly important for Primus’ hopes at a return to the title. With Patricio Pitbull vacating the lightweight title in pursuit of his rematch against featherweight champ A.J. McKee and Benson Henderson entering the matchup as the #3 ranked lightweight, Primus may have just lined himself up for a title shot.

The co-main event saw longtime friends and former teammates Ryan Bader and Corey Anderson square off in the first of two Light Heavyweight World Grand Prix Semifinal matchups of the evening. Bader entered the matchup as the underdog against the surging Bellator newcomer Anderson.

The fight itself lasted less than a minute, with “Overtime” landed a heavy, looping right hand that dropped Bader. Anderson pounced on his opponent, dropping big shots and eventually flattening Bader for the finish. With the win, Anderson earned a 205-lb. title shot in the Light Heavyweight World Grand Prix Final. As for Bader, in his post-fight appearance, he looked rather disappointed and empty. Is there anything left for “Darth” Bader?

The title of this final point may seem a bit obvious and outright dumb but let me explain. Entering this bout, Nemkov was 6-0 inside the Bellator cage. Among those victories, he had defeated Phil Davis, Liam McGeary, Rafael Carvalho, Philipe Lins, and Ryan Bader—all in dominant fashion. In this bout, Nemkov faced his first true sense of adversity under the Bellator banner.

Julius Anglickas went toe-for-toe with Nemkov from the opening bell. Just a minute and a half into the fight, Anglickas caught Nemkov with a hard right hand, dropping the champion. Anglickas would pressure forward and land a stunning 1-2. Sensing himself to be in trouble, Nemkov would level change and score a takedown to survive the rest of the round.

In round two, Nemkov landed the better of the shots on the feet before he would score another takedown and deliver some brutal ground and pound. In round three, Nemkov would further the distance between him and Anglickas by earning another dominant round on the ground. Round four would see the finish of the fight when Nemkov would return the fight to the mat and secure a kimura for the submission victory.

Fighting through early adversity, Nemkov proved himself to be a true champion.