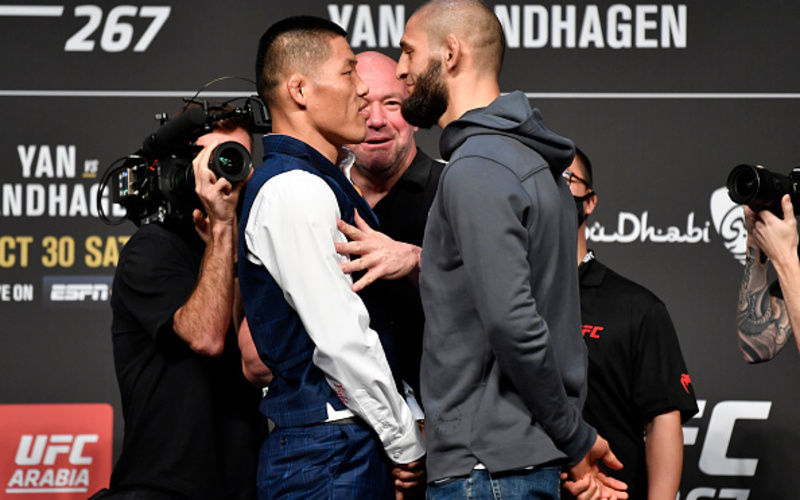 The matchup flying under the radar at UFC 267 is without a doubt the second fight on the main card in eleventh ranked Li Jingliang taking on a returning and confident Khamzat Chimaev. Both men have big things to prove, for Li he has a chance to break into the top ten and become a face of the Chinese MMA scene alongside Zhang Weili, for Chimaev he has a chance to earn a ranking by beating a top guy who has a ton of respect in the MMA community.

Earlier this year, Khamzat Chimaev was diagnosed with COVID-19, and despite being a young and healthy adult, he had a very severe case and a long and hard battle with the virus. So much so that Chimaev had decided to retire despite being 3-0 in the UFC with three impressive finishes in just a two-month span. That report though was quickly disputed by both UFC President, Dana White and Chechen Dictator, Ramzan Kadyrov.

Kadyrov, never one to sit on the sidelines of a good MMA story involving a Chechen or Russian fighter, spoke out saying that he called Chimaev and upon telling him that “all Chechen people were saddened by the news…” he decided he would come back after the tough battle with COVID. Upon him coming back fans were indeed excited and matchmaking thoughts were all over the place, they ultimately landed with who he faces tomorrow at UFC 267 in Li Jingliang.

Lin Jingliang is coming off an uber impressive one-punch knockout against former welterweight promotional heartthrob Santiago Ponzinibio. He has won four of his last five, including three impressive knockouts. He has had his ups and downs in the UFC going 11-4 in the promotion debuting way back in UFC 173, a bout that he kicked off the entire card with which ended with the famous T.J. Dillashaw and Renan Barao fight that started Dillashaw’s stardom. With a win here against Chimaev, Li could see himself making a similar jump up the ladder with the backing of the Chinese MMA market being his rocket fuel.

Keys to the Fight for Khamzat Chimaev

Tell me if you have heard a Russian fighter described this way before, tough, multi-versatile, confident on the ground and on the feet, and the strength of 1980’s Hulk Hogan.

Khamzat Chimaev is the latest in what is turning into a long line of MMA fighters coming out of Russia and its surrounding areas that have complete games and are just overwhelming the fighters from everywhere else on Earth. Last year on Fight Island, he demonstrated his ability to dictate where the fight goes and when it ends if he wants it to. It was one of the most impressive two-month stretches in the companies history and in that time he demonstrated a complete game that should scare everyone in the 170-pound division.

Against Li, he will probably look to take this to the ground quickly where Li isn’t bad at but he certainly doesn’t have the grappling skills that Chimaev possesses. Chimaev can wear him out over a round or two and work the ground and pound angles to get a finish or a one-sided scorecard reading. That is where Khamzat Chimaev has shined brightest and with a performance similar to what we have seen so far he will come out of this being a star for the promotion.

Keys to the Fight for Li Jingliang

It is simple for Li Jingliang, stick with the date that brought you to the dance and for him, it is his crisp boxing ability. He has shown that he has immense power in his right hand knocking out seven of his 11 UFC victories because of that skill set.

Li Jingliang has power in both hands, extreme power in his right specifically, and that paired with his footwork and head movement makes him a serious threat for as long as the fight remains standing. Now, Chimaev most likely will shoot for a takedown within the first 15 seconds and he needs to defend it, if he gets a takedown right off the rip then the whole fight will be over that quickly. Once Chimaev gets you down, he doesn’t let you back up and he will unleash a hailstorm of fists with a high output of ground and pound.

To Li’s advantage though, the fight starts on the feet, he just has to keep it there. If he gets takedown he just has to survive and work his way back to the feet or stall the ground game of Chimaev until he can get back to his feet. Chimaev had a severe bout of COVID and we have seen UFC fighters be up and down in terms of production in fights after battling the virus so the later the fight goes, maybe the more it benefits him.

This fight will either earn fight of the night or the winner will have a performance bonus one way or another, tune in early for UFC 267 because this fight is can’t miss and the most underrated on the main card as well.