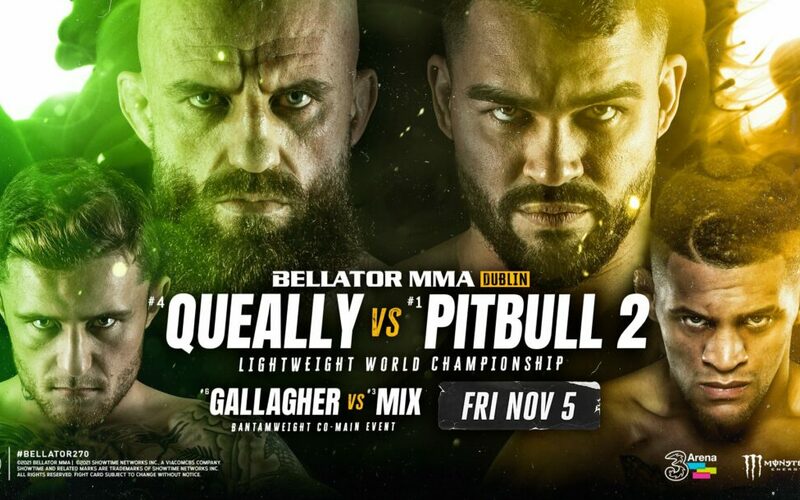 Bellator returns with an Irish feeling for Bellator 270. The card will be headlined by a lightweight title fight between Peter Queally and Patricky Pitbull in a rematch of their May bout. This marks the first time that the lightweight title will be competed for since May 2019.

The co-main event sees the return of the Brash, James Gallagher. Standing across from ‘The Strabanimal’ is the always exciting, Patchy Mix. This bout was originally set for May, however, Gallagher had to withdraw from the bout but we finally get it in Gallagher’s native country.

Elsewhere on the card, we have Daniel Weichel, Pedro Carvalho and Fabian Edwards along with plenty of Irish talent.

The stage was the Mohegan Sun Arena in May. The second fight on the main card saw Irishman, Peter Queally finally settle his feud with Brazillian, Patricky Pitbull. After a back and forth first round, Pitbull looked to take Queally down and as he did so, Queally landed a splitting elbow. The elbow did just that, split the Brazillian open. Covered in blood, both men went back to their corners after the second round. The doctor assessed the cut Pitbull had suffered, calling the fight off.

The two knew that the rivalry wasn’t over as there wasn’t a conclusive ending to the bout. What would have happened in the third round had the cut not stopped proceedings? We’ll find out on Friday in Dublin when the two men start again from round one.

The experience is certainly on side of Pitbull. Stepping into Bellator 270, he will be making the 24th walk of his professional career. Fights with Michael Chandler, Eddie Alvarez, Derek Anderson, Marcin Held, Josh Thompson and Benson Henderson, amongst others, show just how high level he has competed at. The level of competition faced has given Pitbull huge experience inside the octagon and at the age of 35, it’s very much a last dance for the Brazillian. He hasn’t won in Bellator since 2019, and is riding a two-fight losing run, firstly to Tofiq Musayev and then of course against Queally in May.

With his younger brother, Patricio Pitbull coming off a first-round finish loss at the hands of AJ Mckee in July, the older brother, Patricky looks to get the win for the Pitbull Brothers team.

Peter Queally is riding a two-fight winning run, including his latest victory against Pitbull. Prior to this, he notched one of the comebacks of the year when he rallied against Ryan Scope on his way to victory. ‘The Showstopper’ will be headlining for the first time since his victory at Fight Nights Global 87 in 2018. This is a huge opportunity for Queally to prove to everyone that he has what it takes to stand at the pinnacle of the promotion as a champion.

The co-main event is equally as big as the main event. The brash, trash-talking, impressive James Gallagher steps into the Bellator cage for his 13th professional fight and his 10th promotional bout. At 11-1, Gallagher has impressed with his karate style stand-up and slick ground game. We know what he wants to do, take the fight to the ground and get a submission. This is evidenced in his six submission victories in Bellator thus far. We have seen him susceptible to being knocked out when he lost to Ricky Bandejas. With that being said, he bounced back well with four straight victories.

With 9️⃣ submission wins, @StrabanimalMMA is one of the most prolific finishers at 135lbs!
⁰
Gallagher faces Mix, Friday, Nov. 5th at #Bellator270 in Dublin 🇮🇪 🔗 https://t.co/AzNygZiSD5 pic.twitter.com/ko7NTaLuJf

Across from Gallagher stands Patchy Mix. Mix is 14-1 with a promotional record of 3-1. Don’t let that mistake you, however. Mix is solid. He’s finished Bandejas (who finished Gallagher) and has impressive victories over Albert Morales, Yuki Motoya and UFC veteran, Andre Ewell back in 2017. With a 10-0 amateur record, Mix has vastly more experience than Gallagher which could pay dividends. His lone career loss came at the hands of former champion, Juan Archuleta in the Bellator bantamweight tournament.

This was originally scheduled for the main event but following the title fight announcement, has been placed in the co-main event slot. This fight has huge title implications with Mix at #3 and Gallagher at #6. We know that there is a bantamweight title fight scheduled for December and the winner of this one could see themselves in a title eliminator next time out. Expect plenty of grappling transitions and a high paced bout for as long as it lasts.

Elsewhere on the Bellator 270

Fabian Edwards returns and looks to snap his two-fight skid. He stepped in to replace Norbert Novenyi to face Charlie Ward, however, Ward had to withdraw on late notice. Edwards will now face promotional newcomer, Robert Fonseca.

Seven-year Bellator veteran, Daniel Weichel looks to put consecutive wins together for the first time since 2017 when he looks to load more misery on Pedro Carvalho. Carvalho has lost his last two via finish but can certainly put it together. He’s notched three promotional finishes in four wins.

Four Irish prospects including two professional debuts will help the Irish crowd get ready for what promises to be a blockbuster co-main and main event at Bellator 270.