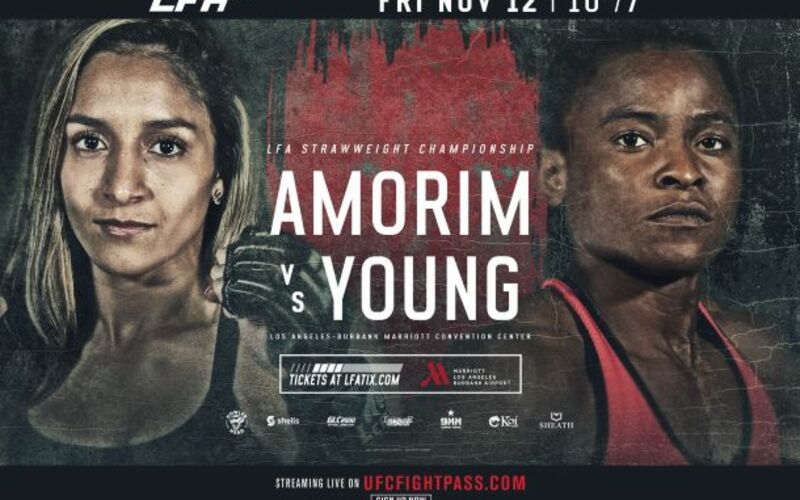 Legacy Fighting Alliance has always provided the shortest ladder for aspiring fighters to climb from the amateur scene to the top of the hill in mixed martial arts, and on Friday night, LFA showcases several men and women ready to make that climb, complete with a world title fight, a former UFC fighter who never actually fought for the promotion, and collision of Judo and BJJ world champions.

While still early in their MMA careers, the main event is a thrilling showdown of opposing styles as Brazil’s Jaqueline Amorim (4-0) meets Nigeria’s Loveth Young (3-1-1). Do not let their relative inexperience in MMA fool you: both women bring elite-level championship experience to the table from their various disciplines.

Loveth Young is a multiple-time world kickboxing champion, and is a problem for everyone that she faces. She is an absolute juggernaut at strawweight, causing damaging quickly to the faces of those she mauls. She has fought incredible competition in just five pro fights, engaging in a bloody war with Vanessa Demopoulos, and claiming stoppage wins over Invicta veterans Cynthia Arceo and Kelly D’Angelo.

The most recent D’Angelo fight saw the American break under the power of Young’s strikes, causing damage to the face and putting D’Angelo on her bike before the second-round TKO. She has been working her wrestling game and has a decent sprawl, so Amorim will have to be persistent and creative if she wants a chance to get her down and submit her.

Amorim is another top-tier prospect being forged in the fires of LFA, claiming quick stoppages wins for the promotion. None of her four pro fights have gone longer than two minutes, and her last fight was a ten-second knockout via overhand hand right followed by hammerfists on the ground over Megan Owen. Amorim has not yet faced the high caliber of opponents that Young has, but that will change when they collide in the LFA cage Friday night.

Amorim is longer and quicker than Young, so she will want to use the jab to set up a takedown and then work for a trip against the cage against the Nigerian. Young, expectant of the takedown shot, should have an uppercut ready for when Amorim dives.

Unless Amorim goes for a trip right off the bat and nails a quick submission, this fight should definitely be the longest and most testing of Amorim’s career. She is going to taste the heat of Young’s fury a good bit here, but she has to stay focused and drive into the cage, not getting lured into Young’s game. Young’s gameplan should be pretty straightforward: sidestep, counter, and punish the takedown whenever it comes. LFA has had some violent, back-and-forth wars in their women’s championship fights, and this one should be no different.

The worthy co-main of LFA 118 is a firefight between two prospects sure to make waves at bantamweight going forward, as Askar Askar (11-2) of Palestine battles the Brazilian Leandro Gomes (6-1). Askar was set to make a short-notice UFC debut against Cody Stamann last February, but was not medically cleared and consequently released from the UFC. Since then, he dropped a fight against fellow prospect Justin Wetzell in the LFA.

Gomes is a BJJ world champion who has picked up the violent aggression characteristic of fighters training at Kings MMA. He is currently 3-0 in the LFA, with a win over recent flyweight title challenger Yuma Horiuchi. While his strength is on the ground, he hits hard and wild with spinning attacks. His combinations can be a little one-dimensional, but his power alone usually creates a demand for respect from his opponents.

Askar’s game works around a jab and chains together potent combinations on the feet. He has got a slick rear uppercut and has finished five of his eleven wins by KO or TKO. He has recently made the move to FactoryX Muay Thai in Colorado, which has refined the game of many elite MMA fighters like Drew Dober, Anthony Smith, and Dustin Jacoby. His wrestling and BJJ are above average, but he can often be overpowered or swept by more athletic fighters.

This fight works well into Gomes’ favor. Askar does not move his head particularly well and gets countered often, which means he is likely to get hit a lot by Gomes’ power shots. Askar probably has an advantage in conditioning and wrestling, but against a power grappler like Gomes, he is likely to get swept or stood back up. Look for this to become an entertaining brawl on the feet, with both guys causing damage to each other’s faces but with Gomes landing the more violent strikes.

Jena Bishop (1-0) was perfect in her destruction of Invicta veteran Helen Lucero at LFA 116 a few weeks ago. The IBJJF 2017 black belt champion took Lucero down right away, pounding her with heavy strikes and setting up the rear-naked choke finish in the first round. Fans eager to see more of Bishop’s expert-level grappling get a gift in her quick return against the judo black belt, Dione Barbosa.

Barbosa (3-1) of Brazil is equally decorated in judo as Bishop, winning the CBJ title in Brazil as a black belt. Barbosa makes her LFA debut, fighting mostly for Katana Fight in Brazil. She has been training for this fight with fellow Brazilian Cris Cyborg, who fights in the main event of Bellator 271 tonight. Owning a win over DWCS signing Karine Silva, Barbosa is six years younger than Bishop.

This is a hard fight to pick considering very little is known about both womens’ striking games, considering their preference for grappling and their relative inexperience in MMA competition. Of the two, Barbosa has already fought two women in the UFC and had a longer training camp, even though Bishop just fought three weeks ago. Both are incredibly strong for their division, and it is likely their grappling could nullify each other, as the fight could see them clinching for time. If it stays standing, as many grappler vs. grappler fights do, it is anyone’s guess. The safer pick is Barbosa given her longer experience training for MMA and time with the aforementioned legend Cyborg.

On other LFA action, two quality strawweight prospects look to pick up their second pro wins as Alandria Brown (1-0) fights Sydney Trillo (1-0), both fighting out of the LA area. Brown is an athletic BJJ purple belt who finished her last LFA fight over Shania Arrendondo by third-round rear-naked choke. “Sid Vicious”, on the other hand, comes from a Muay Thai background and owns a decision win over Melissa Odessa-Parker at LFA 104.

Also on the main card is a featherweight fight between Ryan Fillingame (6-3) and Javier Garcia (7-4). Garcia recently came up short against Bruno Souza for the LFA featherweight title at LFA 114, while Fillingame is making his LFA after being knocked out by Fernando Padilla at KOTC. Look for Garcia, recently awarded a BJJ black belt, to bring the fight to the ground, where he has five submissions.

Team Quest’s Rickey Furar (6-2) was brought in to fight Jose Avalos (6-2) on a few days’ notice. Avalos fought his last four fights for Combate and is currently on a three-fight win streak. Furar was a huge power wrestler at bantamweight, so the question will be that advantage transfers up a weight class at featherweight. Avalos owns the majority of his wins by submission, so Furar could be in for a long evening.

In a flyweight fight, Taylor Mauldin (1-0) of Millennia MMA will look to continue her streak of submissions in her amateur and pro career by clashing with “Too Much” Nadine Mandiau (1-2) of Belgium. Despite an uneven record, Mandiau has already fought top-shelf competition in Claire Guthrie and Vanessa Demopoulos, making her a rough test for Mauldin.

Opening the event is a bantamweight fight between Joseph Dorado (2-0) of CSW Training Center and Corvan Allen (1-0) of Millennia MMA.

Jaqueline Amorim def. Loveth Young via Submission in Round 3

Leandro Gomes def. Askar Askar via TKO in Round 1

Javier Garcia def. Ryan Fillingame via Submission in Round 2

Taylor Mauldin def. Nadine Mandiau via Submission in Round 2

Joseph Dorado def. Corvan Allen via KO in Round 1

How to Watch: The LFA 118 main card airs live on UFC Fight Pass at 10pm EST / 7pm PST. Due to a few fights falling out, the bout order and designation of which fights will feature on the main card is not yet clear. LFA typically airs the prelims live on their Facebook page.