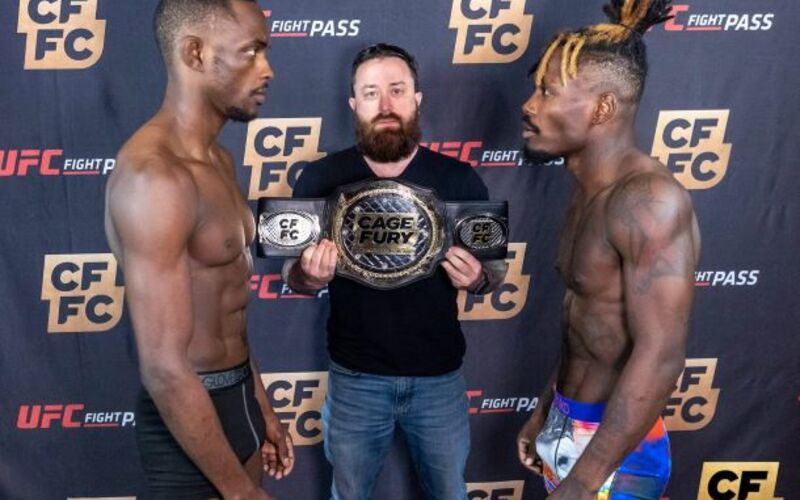 CFFC is back in Tunica, Mississippi for the second time in just four months to host CFFC 103 at the Horseshoe Casino and Hotel. MMA Sucka has you covered with results for CFFC 103 and many more cards this action packed weekend.

In the main event, Jackson-Wink’s Da’Mon Blackshear (10-4), squares off with Birmingham, Alabama’s DeAndre Anderson (5-0) to determine the next CFFC bantamweight champion. Blackshear is without a doubt one of the more UFC-ready bantamweights on the regional scene. He’s shared the cage with several UFC and Bellator veterans including Pat Sabatini, Aalon Cruz, Kris Moutinho and Danny Sabatello. This will be Blackshear’s second shot at CFFC bantamweight gold as his first came in his promotional debut back in 2018 against Sabatini. Since that fight he has been on a complete roll, winning four of his last five, three of which by way of submission. Blackshear has secured a finish in seven of his ten wins and has proven his worth on the regional scene. The one thing he’s missing is a gold strap.

Cobra Brazilian Jiu-Jitsu product DeAndre Anderson will stand in Blackshear’s way. The Jiu-Jitsu blue belt is beyond a pleasure to watch fight and always puts on a show. Whether it be post fight interview selfies with CM Punk or his electric in-fight antics, Anderson never seems to lack the entertainment factor. Although he’s considered more of a grappler, Anderson can get it done with the hands as well. In his last bout he secured an 11-second knockout of Jose Perez at CFFC 99 and notched another first-round knockout in his pro debut. Rob Haydak and the CFFC crew have treated fight fans well with this one.

Someone’s 0 has got to go in co-headliner as Donovan Beard (5-0) and Raheam Forest (3-0) go to war in a featured welterweight scrap. Arkansas’s Beard makes his CFFC debut in what is his biggest test to date. With that being said, it is clear he is on top of the world right now as an undefeated pro riding a three-fight finish streak. Nicknamed “The Highlight Reel”, it’s safe to say the 32-year-old’s style is one fans do not want to miss.

Memphis, Tennessee’s Raheam Forest also makes his first walk to the CFFC cage tonight. The 24-year-old is a bright prospect who has dominated every pro bout he’s been in. After a tenured 11-fight amateur career, Forest made his pro debut earlier this year. He secured three first-round knockouts in his first three pro bouts and looks for a fourth tonight. The Law School MMA product is a patient striker, but when he attacks he will end his opponents night with one strike. It feels safe enough to say the judges won’t be needed in this bout.

Da’Mon Blackshear (11-4) def. DeAndre Anderson (5-1) by Submission via rear-naked choke at 4: of Round 1 to earn CFFC Bantamweight championship