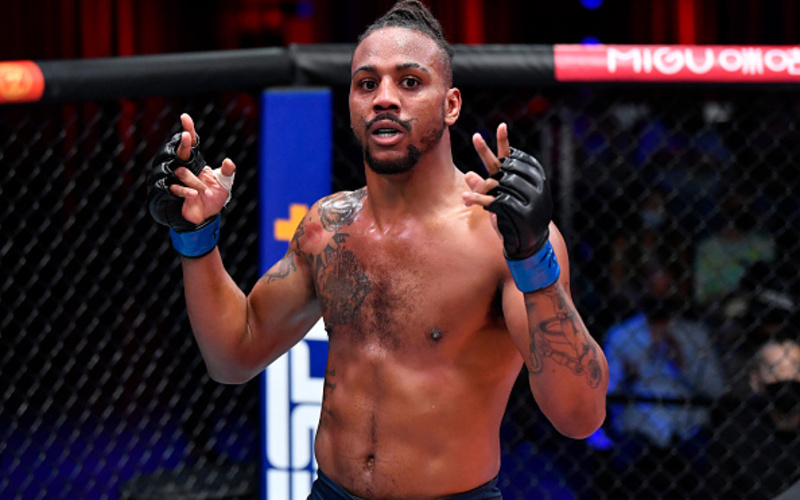 Joseph Holmes reached a major milestone in his professional mixed martial arts journey when he was signed to the UFC. “Ugly Man” Joseph Holmes improved to 7-1 when he defeated Jhonoven Pati by TKO at Fury FC 53 on Nov. 14, which doubled as a Dana White: Lookin’ For a Fight event.

“It’s amazing,” Holmes told MMASucka. “I’m on cloud nine. This is amazing. This is an absolute dream come true. I feel like I’ve been saying that a lot, but it’s true. I literally couldn’t be happier with where I am in life right now.”

It was Holmes’s second time competing – and winning – in front of UFC President Dana White. Holmes submitted Shonte Barnes in October at the Dana White Contender Series, but White wanted to see if Holmes could repeat his success before signing him to the UFC. Holmes did just that against Pati, and he is now a member of the UFC.

Holmes in May told MMASucka he believed his UFC call was “right around the corner.” Three wins later and two stoppages in front of White, and he got his call.

Holmes understands why White didn’t sign him off his Contender Series stoppage of Barnes.

“I’m young and this isn’t easy,” Holmes said. “There’s a bunch of guys in there who have a lot more experience than me. For [White] to want to see me do that again and for him to sponsor [Fury FC 53: Lookin’ For A Fight] pretty much just to see me. That’s amazing and a great feeling. To go in there and do what I said I was gonna do was just amazing.”

Holmes had more time to prepare for this fight with his coach, James Krause, saying he picked up on some of the counters that Krause likes to use in his own fights. Holmes says he used one of Krause’s favorite techniques to finish Pati and earn his UFC contract.

Holmes dealt with adversity about 10 days before his fight with Pati. Holmes, who is from Texas, was traveling back and forth to Kansas City, Missouri, where the weather was wet and really cold in the morning; different from his usual climate in Texas. He caught a “gnarly” cold, a very sore throat and suffered significant body aches. His coronavirus tests came back negative.

Holmes, a middleweight prospect, said he hopes to make his UFC debut by January or February 2022. He has some opponents in mind, but was reluctant to make a call out.

“I don’t quite know how this call-out thing goes, nor do I feel like I’m in a place to call anyone out,” Holmes said. “There are a few names I’ve looked at.”

Phil Hawes, Gerald Meerschaert, and Jacob Malkoun are the three men that Holmes expressed interest in fighting in his debut. He has backstory with one of them.

“[Meerschaert] was actually in the corner of Jordan Newman, which is the guy who beat me in my [pro] debut,” Holmes said. “That would be nice to kind of show them how much I’ve grown since that fight. I definitely would like to take out anybody coming from Duke Roufus’s camp.”

Meerschaert has a fight lined up against Abusupiyan Magomedov for the Dec. 18 UFC event. “GM3” is coming off a two-fight winning streak after beating Makhmud Muradov and Bartosz Fabinski.

Hawes is coming off a knockout loss to Chris Curtis on Nov. 6 and does not have his next fight booked.

Holmes wanted to shout out his management, Iridium Sports Agency.

“They’ve been absolutely incredible for me. Like I said before, I’m on cloud nine. I couldn’t be happier about where my life has taken me right now. This is just crazy. Anybody who knows me has been telling me, ‘You always said you were going to do it, and you did it. I’m proud of you.’ I really have been saying this since the beginning. ‘I’m going to get to the UFC. I’m going to do this. I’m going to do that.’ And I’m actually doing it, so man, I’m just so proud of myself.”