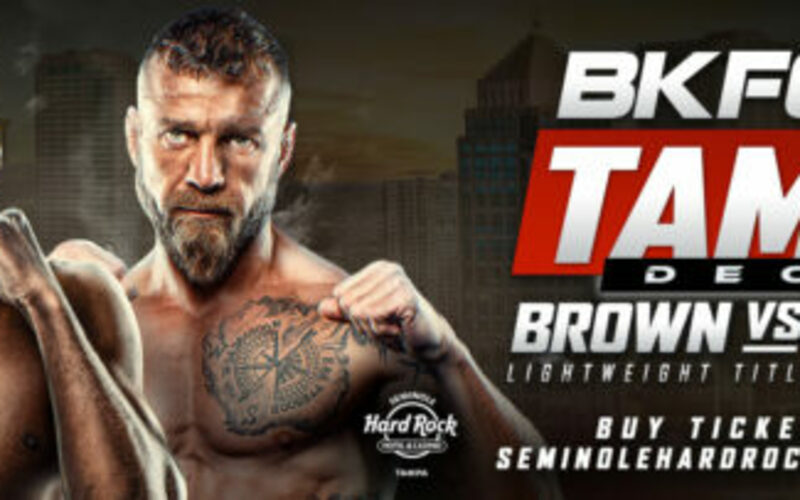 The most successful year in BKFC history continues to roll on as they have announced their next event will take place in Tampa, Florida.

The card is headlined by a 155-pound title eliminator between Martin Brown and Bobby Taylor. Both men are 1-0 in the promotion with Brown being 37 years old and Taylor being 42 years old, this will be a fight of some very spring chickens. The winner though will have the pleasure of facing the BKFC lightweight champion, and one of its biggest and toughest stars, Luis Palomino at a future event.

The co-main event on December 9th has UFC and Bellator veteran Robbie Peralta taking on former PFL and Contender Series challenger Peter Petties. Overall though the card does lack a ton of big names for fans to be drawn to but that comes with them taking the UFC approach and loading up as many weekends as possible with cards.

This past year alone they were able to get 13 fight cards completed, not including this upcoming one in Tampa, and they did so as a smaller promotion during a year when many sports entities struggled to get sanctioning and support. They used different states to their advantage, we can’t ignore that, early on in the year based on COVID responses but by the end of the year the fact that they made their New York state debut should signal they aren’t going anywhere.

The promotion is poised for a big 2022 with so many big signings having yet to make their debut such as Mike Perry, Jimmie Rivera, and Chad Mendes just to name a few.

Eyeballs will be glued as always when they make their debut and MMA Sucka will have that coverage as always.