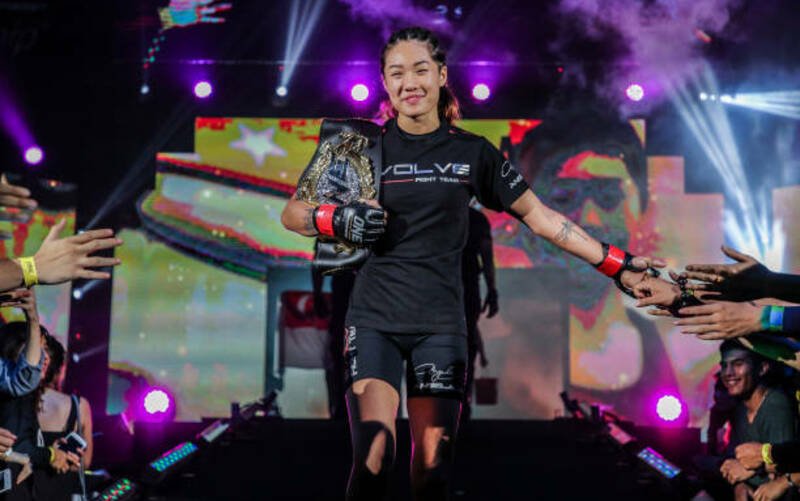 The ONE Atomweight World Grand Prix will come to a close at ONE: Winter Warriors on Friday, December 3, when Stamp Fairtex and Ritu “The Indian Tigress” Phogat meet in the final. The winner will hoist the silver belt high but also get a ONE Atomweight World Championship title tilt against “Unstoppable” Angela Lee.

And the reigning queen crashed the recent media event for the two finalists to give her thoughts on the matchup.

“I think both ladies are, you know, world-class in their styles. Everyone knows Stamp Fairtex. She’s known for her world-class [skills] in Muay Thai and kickboxing, being a former world champion and Ritu as well. She’s an incredible wrestler, and that’s her strong suit, where she shines,” said Lee.

“I think it comes down to who’s able to utilize their mixed martial arts game as a whole, who can really incorporate mixing up the ranges and the styles, and who has a more complete MMA game. It’s anyone’s game. I think that their heart and their will are definitely going to be tested. “

The two finalists remained humble and appreciative of the ONE Atomweight World Champion. Stamp called Lee her idol while Phogat mentioned her words served as constant motivation for her ascent up the ranks.

“Angela Lee is one of the top champions, and she’s also a great human. While my focus remains on the current match, I haven’t thought of the fight with Angela Lee yet. However, if I get to fight Angela Lee at all, I’m already quite experienced, and I’m a master of my game,” said Phogat.

As for the exciting matchup itself, Stamp and Phogat are ready for the clash inside the ONE Championship Circle.

In reply to a question about Phogat seeing fear in the eyes of Stamp during a previous matchup, the former ONE Atomweight Kickboxing and Muay Thai World Champion found some humor in the assertion she was fearful in competition.

As the co-main event battle inches closer, the stars are not shying away from the bright lights. If pressure makes diamonds, these two fast-rising atomweights will sparkle on Friday, December 3. And Phogat says she is not nervous about the biggest matchup of her career.

“Nervous, not one bit, but excited for sure. I just feel that I am inching closer to my goal, and I’m super enthusiastic about it. My preparations have been good. It’s been on full steam. I’m really excited about the upcoming match,” said the Indian wrestling star.

Lee awaits whoever gets their hand raised, and all three women have great admiration for one another. The three athletes believe in the value of martial arts and want to be an example of that on a global stage.

“I think there’s huge mutual respect among us. I just appreciate the respect. I think that you don’t need to trash talk your opponent, I don’t think that’s who they are, and that’s not who I am. We don’t need to put on a show for the world and create some kind of drama that’s not there,” said Lee.

And Phogat sees the impact this platform will have on the next generation, and she hopes to lead by example.

“This match is of great significance to India, especially since MMA isn’t a popularly celebrated sport in the country. I want to be a beacon of hope and inspiration to the younger generation, to be aspirants, I want to open a new avenue for them to come out and practice MMA in full power,” said Phogat.

All that’s left is the match.

Stamp and Phogat are two of the fastest-rising stars in the sport today and have always seemed to be on a course for high-stakes meetings. Their first one carries the weight of a title match in 2022. Stamp vs. Phogat is the final martial arts fans needed, and they’ll get it at ONE: Winter Warriors.