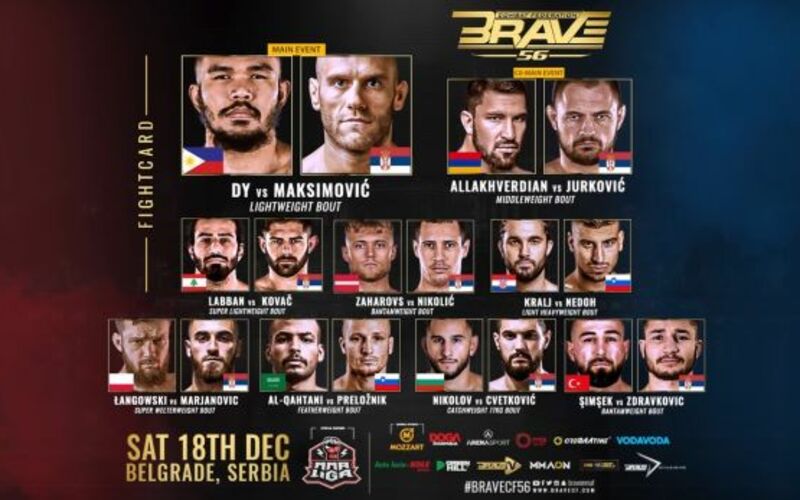 Brave Combat Federation ends its action-packed year with Brave CF 56, set to take place today live from the Belexpocentar in Belgrade, Serbia. Serbia is the tenth different country in Europe to host an event for the promotion, and the 25th overall. As always, Brave CF is partnering with a local promotion to put on this event, this time with Serbia-based promotion MMA Liga. Every fight will feature at least one fighter from Serbia or the nearby country of Slovenia.

In the main event, UFC veteran “The Incredible” Rolando Dy will face local favorite Slobodan Maksimovic. The Filipino Dy faced significant visa issues as he tried to get into Serbia due to COVID restrictions, but got into town on Thursday and made weight without a hitch. Holding a record of 14-10 with one No-Contest, Dy has gone 5-3 between both Brave CF and UAE Warriors since being released from the UFC after a 1-3 run. He will look to rebound from a TKO loss in his last outing against “Limp” Maksimovic, who picked up two wins in LFA back in 2017 and has only lost once since then to bring his record to 17-6-1. Both fighters have gone to the judges’ scorecards more often than not.

MMA Sucka has fight fans covered with Brave CF 56 results, with the card set to start at 12:30pm ET/9:30am ET and can be seen on Brave CF TV.

Ahmed Labban def. Nemanja Kovac via Submission (Guillotine Choke) at 1:32 of Round 2

Jakob Nedoh def. Zvonimir Kralj via KO (Punches) at 0:50 of Round 1

Jovan Marjanovic def. Tomek Langowski via TKO (Punches) at 1:31 of Round 1

Abdullah Al-Qahtani def. Nejc Preloznik via TKO (Body Kick and Punches) at 1:03 of Round 3

Nikolay Nikolov def. Milos Cvetkovic via Submission (Rear-Naked Choke) at 2:10 of Round 2