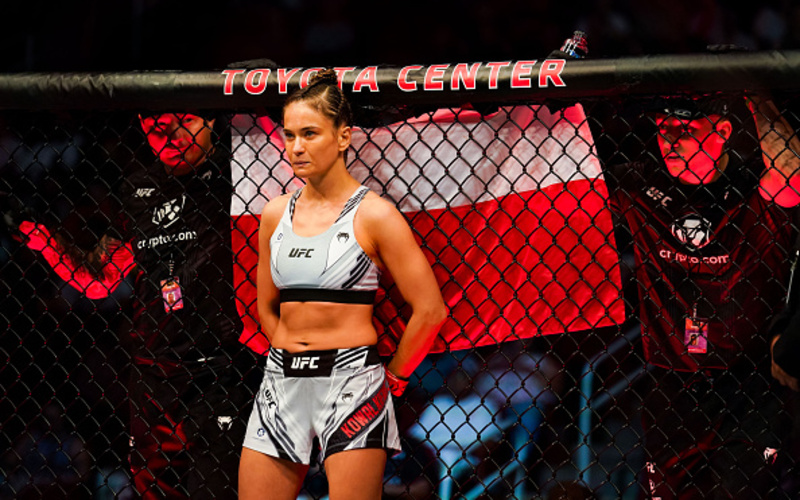 The UFC Strawweight division has an incredibly skilled top ten. With “Thug” Rose Namajunas sitting atop the 115 lb. rankings, young guns like Amanda Ribas and Mackenzie Dern are chasing close behind. In similar fashion, vets like Carla Esparza and Tecia Torres are eyeing their potential moves towards title contention. Considering this, not everyone in the division is in the same boat . Here are three UFC Strawweights that need to find their way into the win column in 2022 to avoid dropping from UFC competition.

“The Spider Monkey” has not seen her hands raised in victory since November 2020. Currently on a two-fight losing skid, Yoder has notched but three wins in her ten Octagon appearances. Yoder last competed in July this year where she dropped a unanimous decision to Jinh Yu Frey. Surrendering all three rounds on every judges’ scorecard, Yoder will need to start her new four-fight contract in a big way with her more than likely return to competition in 2022.

As a red-hot prospect entering the UFC with a professional record of 8-2 in 2018, Cifers would make her UFC debut on short notice in a fight against fellow UFC newcomer Maycee Barber. Cifers would lose her promotional debut via TKO but would go on to win her sophomore UFC appearance at UFC 235. Five months later Cifers would knock off Jodie Esquibel at UFC 241.

Seemingly finding her groove, Cifers looked to continue her winning ways by squaring off with Angela “Overkill” Hill in January of this year. Hill would prove to be too much for the twenty-nine-year-old fighter out of Embrace Martial Arts, finishing her with strikes in round number two. In May, Cifers would fall to Mackenzie Dern via submission and would be submitted two more times this year when facing Mariya Agapova and Mallory Martin.

In 2022, Cifers must do something. Whether its workshop her ground game to make a return in 2023 or reenter the Octagon and pick up a big win, “Shockwave” needs to make a big move in 2022.

The former KSW Women’s Flyweight Champion Karolina Kowalkiewicz made her UFC debut in 2015. Jumping out to a 3-0 record in her first three Octagon appearances, Kowalkiewicz challenged Joanna Jędrzejczyk for the UFC Strawweight title at UFC 205. Falling short in the 25-minute contest, Kowalkiewicz would drop a first round submission loss to Cláudia Gadelha at UFC 212. The Polish native Kowalkiewicz found success in her next two outings against Jodie Esquibel and Felice Herrig but would surrender five straight losses from September 2018 to her last bout at UFC 265 against Jessica Penne.