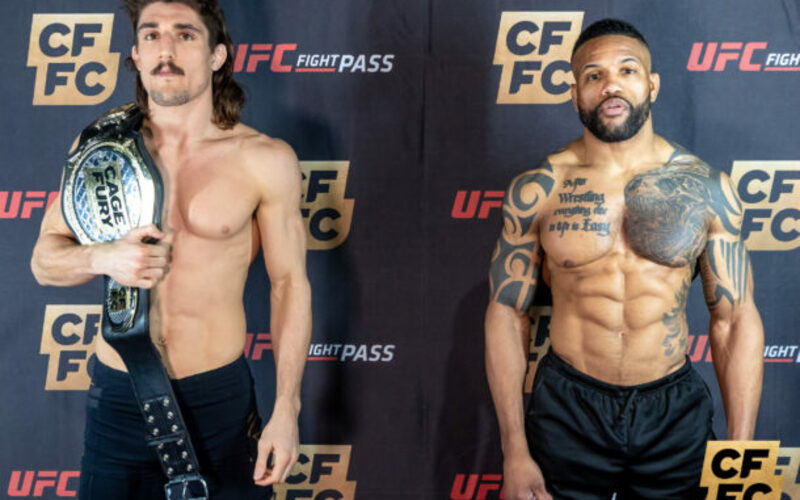 CFFC hosts its first card of 2022 as CFFC 105 takes place at the 2300 Arena in Philadelphia, Pennsylvania tonight. MMA Sucka brings live coverage of this card and many more.

In the main event, two-time Dana White’s Contender Series veteran and CFFC middleweight champion Aaron Jeffery (10-3) defends his strap for the first time against PFL veteran Rex Harris (12-5). Niagara Top Team’s Jeffery is a knockout artist scoring seven of his 10 wins in that fashion. Although he is coming off a tough loss to UFC middleweight Caio Borrahlo at DWCS 44 , he has won four of his last five, including three by knockout. Jeffery has shared the cage with the likes of Sean Brady, Brendan Allen, and one of tonight’s commentators in Andre Petroski. With a convincing win tonight, he can make a case that he is ready for the big show.

Rex Harris stands in Jeffery’s way tonight. Harris is a veteran of two CFFC bouts, however, this will be his first promotional appearance since 2012. The 39-year-old has finished seven of his 12 wins and is coming off a sub-two-minute knockout back in August. He has shared the cage with the likes of Louis Taylor, Shamil Gamzatov, and Chris Curtis. Overall, this is a quality scrap and one for Jeffery to get back in the win column.

Co-headling the card is a featherweight scrap between the undefeated Paul Capaldo (6-0) and the highly-touted Jose Perez (5-1). Capaldo is a member of the always-entertaining Nick Catone MMA team and holds a perfect record. The 25-year-old is a knockout artist, earning three wins that way, and scored a spinning wheel kick finish in his last bout at CFFC 95. Capaldo has spent the entirety of his six-fight career with CFFC and could secure a title shot with a win tonight.

Perez rolled in his last bout, earning a decision win over Isa Dalipaj at CFFC 102 following a tough loss to DeAndre Anderson. The 26-year-old is a crafty grappler with a nasty submission skillset. Three of his five wins have come by way of submission and he’s even earned a banana split finish. This is an awesome clash of styles and a bout with title contender conditions on the line.