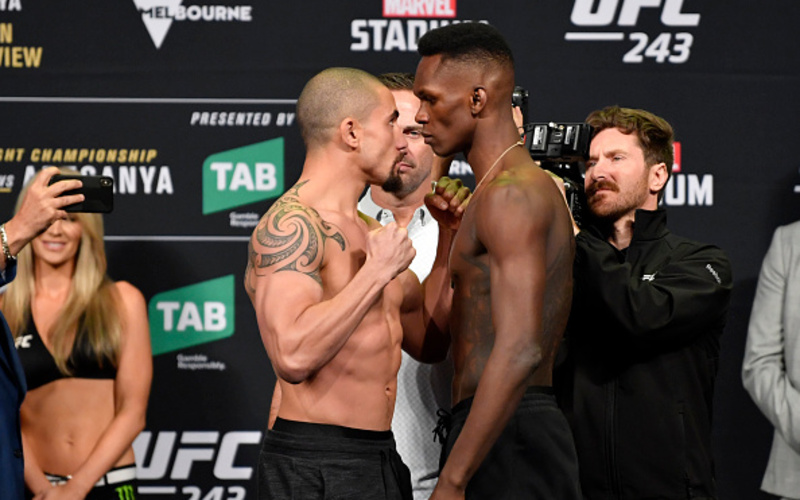 Robert ‘The Reaper’ Whittaker is set to face off against the man who a little over 27 months ago defeated him to claim the throne of the middleweight division at UFC 243.

Enter: Israel ‘The last Stylebender’ Adesanya. Whittaker suffered the toughest loss of his career in a beautifully placed knockout by Adesanya in the second round that put Whittaker down.

It was that night Adesanya became the UFC middleweight champion in just a span of two years since debuting. Since then, he has developed into one of the brightest and most exciting stars the UFC has to offer.

Defeating challenger after challenger in Yoel Romero, Paulo Costa, and most recently, a rematch in Marvin Vettori. Adesanya is at a point in his title reign he has begun to lap his oppositions as he faces Robert Whittaker in a rematch.

This is a much different Robert Whittaker however. Whittaker took a near 10 month hiatus after his loss, revealing it was therapeutic to his mental state of continuing to fight. He returned in a highly anticipated matchup against Darren Till, who was coming off a big win against Kelvin Gastelum at UFC 244 which marked Till’s debut at 185. Many were interested to see how Whittaker would react to his loss, as he responded with a hard-fought unanimous decision win over Till.

He later went on to defeat Jared Cannonier and Kelvin Gastelum by unanimous decision, displaying more motivation and ferocity behind his skills. In his bout against Cannonier, Adesanya had co-signed on the idea of Cannonier defeating Whittaker to earn the next title shot. Whittaker responded with a dominant victory and then did the same splendid work on Kelvin Gastelum.

Whittaker displayed prowess in the grappling department in both those wins as he raised eyebrows on the skill set displayed that many concluded could be the factor to beating Adesanya in a rematch.

The reason being was the struggles Adesanya displayed in his bout against then light heavyweight champion Jan Błachowicz. The Auckland native was defeated for the first time in his career in a daring fight moving up to 205 lbs to claim a second divisional title. In that bout against Blachowicz, Adesanya showed he had a struggle against grappling, a weakness also displayed in his first fight against Vettori.

Whittaker is already a dangerous striker, perhaps just a step below Adesanya in that department, but should the Australian incorporate a strong ground game, it becomes very interesting.

On Saturday, at UFC 271, we will see chapter two of these middleweight greats. Has Robert Whittaker improved since their first meeting, or will Israel Adesanya remove any doubt between both rivals as to who is the better man?

The only way to settle that is in the proving grounds of the UFC.