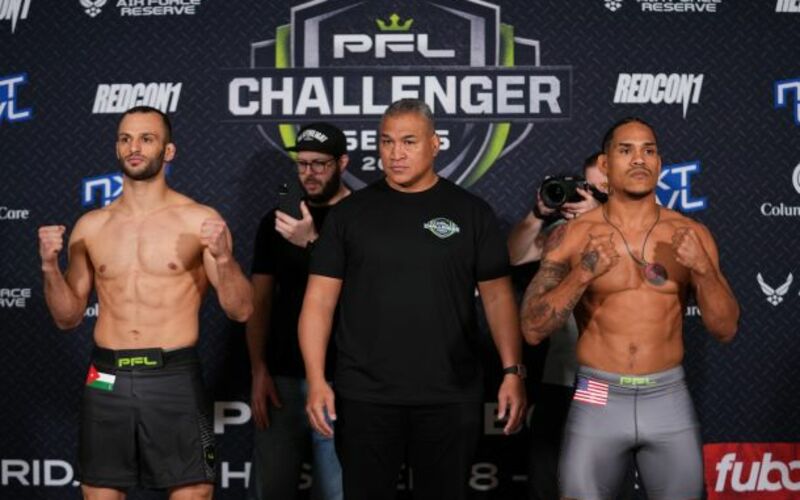 The search for entrants in the PFL’s 2022 season continues tonight as eight welterweights answer the call to fight for a spot in the regular season. At the end of the night, celebrity judges Tyron Woodley, Ray Lewis, and Jeremy Piven will select a fighter to earn a PFL 2022 season contract. Check back here as MMA Sucka provides live PFL Challenger Series 2 results and the contract winner.

Despite three fight-week replacements, the card maintains four fights and three champions from other promotions. In the main event, Brave CF champion Jarrah Al-Silawi fights Michael Lilly. The Jordanian has been on a tear the last few years, most recently taking out UFC veteran Ismail Naurdiev with leg kicks. Tomorrow’s fight was renegotiated as a catchweight of 177lbs, so that could factor into the decision to award a contract.

Titan FC is also sending their welterweight champion in Dilano Taylor to fight Combate Global and LFA vet Mark Martin. Both fighters are 7-1, and both have had pretty strong competition so far in their young careers. LFA Welterweight Grand Prix winner Carlos Leal also has a spot on the card against last-minute substitute Korey Kuppe. Kuppe came up short in an appearance on Dana White’s Contender Series against Michael Lombardo in 2020, and has since rebounded with a submission win in Total Warrior Combat.

Opening the card is another late addition to the card, a battle between Kentucky natives with only one loss on the Southeastern US regional scene as Chris Mixan faces Nate Pierce.

Dilano Taylor def. Mark Martin via TKO (Doctor Stoppage) at 5:00 of round 1

Carlos Leal def. Korey Kuppe via TKO (Punches) at :56 of round 1

Chris Mixan def. Nate Pierce via TKO (Knees and Punches) at 3:29 of round 2