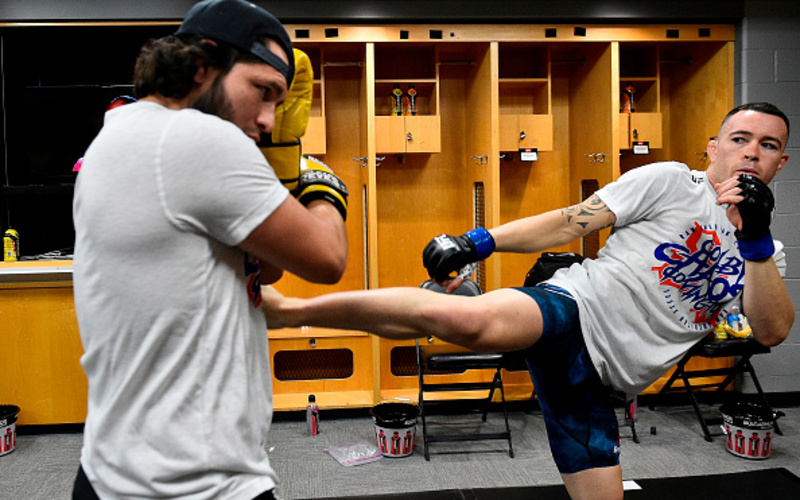 This Saturday, March 5, at UFC 272, two of the biggest welterweight contenders in the UFC go head-to-head for the first time. Not too long ago, Colby “Chaos” Covington and Jorge “Gamebred” Masvidal were not only teammates but the best of friends. They trained together, slept together, bled together, celebrated together.

Now, the two best friends have turned bitter rivals — what was once “us against the world” has become “me vs you.”

The two Florida-based fighters will meet within the walls of the Octagon for what could be a fight of the year contender.

Covington vs Masvidal — From love to hate

Fight fans have seen the course of this relationship in real-time. Only four years ago did we see Masvidal in the corner of Covington, as he defeated Rafael dos Anjos to claim the interim welterweight championship title. Yet, only a year later, Covington’s absence in the corner of his teammate at the latter’s bout against Nate Diaz for the BMF title was noticeable. Two years later, Covington’s dramatic departure from American Top Team was there for all to see.

Both “Chaos” and “Gamebred” are coming into this fight off of a loss against current welterweight champion Kamaru Usman — Covington surviving a full five rounds and losing by unanimous decision while Masvidal suffered a devastating second-round knockout.

Now the first- and sixth-ranked contenders finally face each other in Las Vegas this weekend. Let’s see how the two compare.

“Chaos” in the Octagon

Colby Covington’s wrestling background is no secret, as fans have seen this in the case of his interim championship fight against RDA, but there’s more to “Chaos” than this. His TKO win against Max Griffin, his TKO win against Tyron Woodley, they’ve shown that Covington has power in his hands — and he’s not afraid to use it in the slightest.

Covington also has the cardio to match. Fifty percent of his 13 wins have come by decision, proving that his gas tank is capable of going all the way. Despite being rocked multiple times during his 5-round bout against Usman, “Chaos” was able to hold his own and still throw some strong punches in return.

Throughout his career in the UFC, Covington showed that he is capable of going wherever the fight takes him and that mental attitude, as well as his vast skill set, is what will help him this Saturday. But will that be enough?

Where Covington strives in the ground game, Masvidal excels on the feet. Known for his infamous 5-second flying knee knockout against Ben Askren, “Gamebred” has lived and breathed the striking game for most of his life. But also, unlike Covington, Masvidal is extremely methodological in his striking.

Masvidal has a reputation for being a cold and calculating fighter. All his strikes are well-timed, and he doesn’t get ahead of himself, unlike most fighters in the game. During his fights against Darren Till, Stephen Thompson, and even against Nate Diaz, “Gamebred” threw shots that rocked his opponents, but rather than rushing in and throwing wildly, he calmly closed the gap and threw more devastating shots.

Masvidal is the more experienced contestant in this bout, not only being four years Covington’s senior but also with a total of 50 professional fights under his belt compared to the 19 of “Chaos.” But is experience enough to win this heated matchup? Only time will tell.