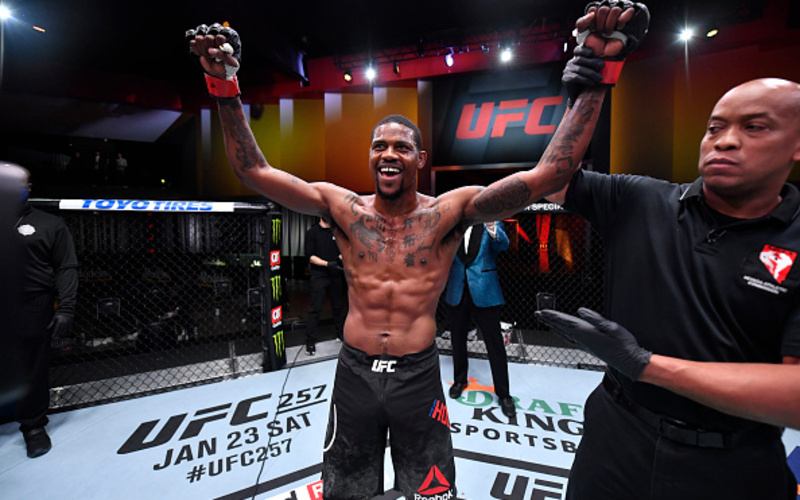 Texas’, Kevin Holland, is set for his UFC welterweight debut this weekend after going 8-4, along with one no contest, as a UFC middleweight. The 29-year-old is hungry to get back in the win column after dropping two of his last three. Prior to 2021, Holland was one of the most, if not the most, intriguing talents in the UFC after going 5-0 in 2020, winning four of those bouts by way of finish. Holland is known for his finishing ability scoring 17 of his 21 wins in that fashion. His in cage trash talk and entertaining antics have earned him the nickname “Big Mouth” courtesy of UFC President, Dana White. In Holland’s last bout, an accidental headbutt ended his scrap in a no contest at UFC Vegas 38. After an attempt to reschedule the bout with Kyle Daukaus fell through, Kevin Holland announced his move down to welterweight. As a professional martial artist, the Texan has scored wins over top 15 welterweight, Geoff Neal, MMA legend, Jacare Souza, knockout artist, Joaquin Buckley, and submission specialist, Anthony Hernandez. Holland has also shared the cage with the likes of Thiago Santos, Marvin Vettori, Derek Brunson, Brendan Allen and Rafael Lovato Jr. Kevin Holland is a sizable favorite in this bout at around -350 and it seems the line is trending upwards. His striking has the potential to cause real problems for a fellow finisher in Oliveira however, it will be interesting to see if or when he initiates grappling exchanges.

The Brazilian Cowboy steps foot into the octagon for the first time in 2022 also seeking to get back in the win column. Oliveira has had a bit of a tough go in recent history going 2-6 in his last eight bouts however, he’s fought top level competition. In his last bout, he dropped a decision to Niko Price in a war at UFC Vegas 38, the same card Holland last fought on. Like Holland, the 34-year-old is known for his finishing ability scoring 17 of his 22 that way. Oliveira has only let the judge’s scorecards get involved in nine of his 35 pro bouts. If there is a blueprint to takedown the Brazilian Cowboy, it’s grappling. He has been defeated by submission six times in his career including twice in his last three bouts, both in the first round. Oliveira has shared the cage with the likes of Shavkat Rakhmonov, Gilbert Burns, Donald Cerrone, Gunnar Nelson and Mike Perry. He’s also scored victories over Carlos Condit, Max Griffin, Will Brooks and Tim Means. Oliveira has been in the UFC since 2015 and will make his 22nd promotional appearance this weekend at UFC 272. His best chance to win is to back Holland up and take him down however, that will be easier said than done. With that being said, you can never rule Oliveira out of a fight as he can finish at anytime.

Overall, this bout makes tons of sense for Holland’s welterweight debut considering the same amount of finishes, the skids and the quality resumes the two have. Oliveira is a tough test for anyone attempting to break into the top 20 of the welterweight division. However this fight plays out, there’s no doubt it will be electric and one you shouldn’t blink during.