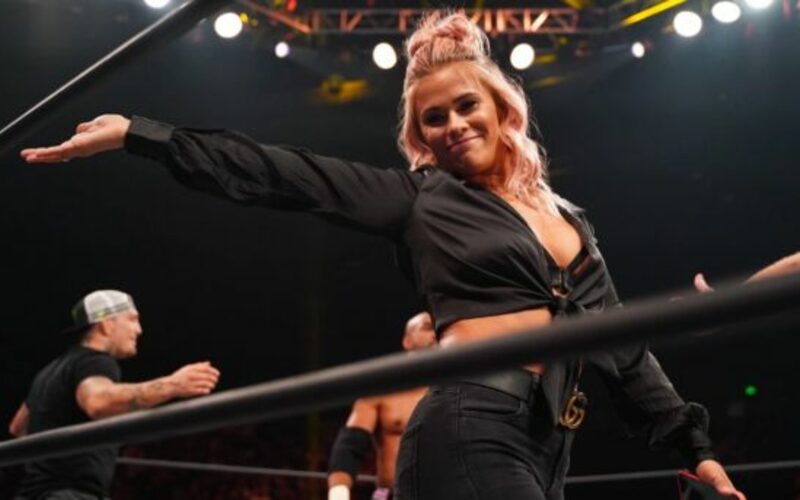 Paige VanZant has decided to try herself in a new kind of in-ring performance as the UFC and BKFC veteran signed with All Elite Wrestling on Wednesday night.

The ATT team member made a few appearances on AEW’s programming since 2021 alongside her gym colleagues and Dan Lambert.

At last night’s edition of AEW Dynamite VanZant took part in a newly ignited storyline with Tay Conti, a real-life girlfriend, and on-screen manager to pro wrestler Sammy Guevara. At the ending stage of AEW TNT championship match between defending Guevara and ATT associate Scorpio Sky, VanZant attacked Conti while Lambert and Sky’s tag team partner, Ethan Page have intervened in the ring. All this resulted in a title change and all of ATT representatives celebrating in the middle of the ring with VanZant signing her contract on Conti’s lower back.

It looks like VanZant will be preparing for a showdown against Conti. Many times she expressed a desire to cross over into the world of professional wrestling, even back in her days in the UFC.

After her exit from UFC in 2020 VanZant signed a multi-fight deal with Bare Knuckle Fighting Championship, which she summarised with the word ‘lucrative’. Her current bare-knuckle record is 0 – 2 and she was expected to make her return in spring or summer BKFC officials are yet to respond to VanZant’s becoming an AEW superstar.

VanZant is not the first member of the American Top Team to exercise the idea of stepping into the squared circle, as she was preceded by the likes of Jorge Masvidal, Junior dos Santos, Andrei Arlovski, Bobby Lashley, and King Mo.