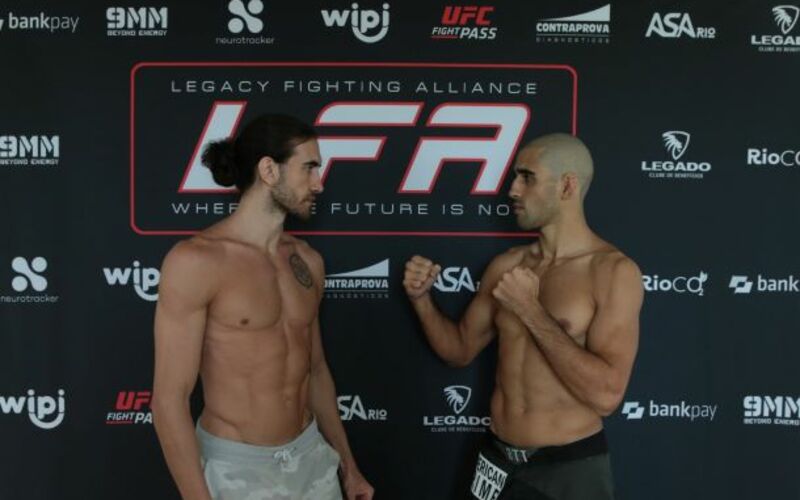 Legacy Fighting Alliance returns to Brazil tonight to bring top Brazilian prospects into the global spotlight. Not one, but two titles are up for grabs in the main and co-main event. Stay tuned right here for live LFA 126 results.

When Jonas Bilharinho (9-1-1) landed a spinning wheel kick on Dana White’s Contender Series last year, a lot of people jerked awake after nodding off. While his finish was beautiful, the overall fight was not stirring enough to convince Dana to sign him. Tonight at LFA 126, Bilharinho will get a big opportunity to show if he has made adjustments to his style to fight more urgently.

He will face a younger fighter with an almost identical record in Jose Delano (9-2). Delano is the Shooto Brasil featherweight champion, coming off a five-round unanimous decision over Luciano Benicio. The Complexo Ribalta in Rio de Janeiro will play host to this featherweight title fight, which is just down the road for both of these athletes’ fighting homes.

Gabriel Bonfim and Eduardo Garvon (13-3-1) contend for the LFA welterweight belt in LFA 126’s co-main event. Bonfim, fighting out of Brasilia, is the second of the two Bonfim brothers fighting tonight. “Marretinha” is undefeated at 11-0 and owns a perfect finishing record. His last appearance came at LFA’s last voyage to Brazil, LFA 112, finishing Brenner Alberth with punches in round 3.

His opponent, Eduardo Gervon, trains out of Evolucao Thai MMA in Curitiba. Although only 25 years old, he hasn’t been that active in the past few years, fighting just once in four years. He has mostly fought on the Brazilian regional scene except for an outing to Brave CF in 2018, where he notched a first-round submission.

The card top to bottom has eight undefeated Brazilian fighters, showing its high quality. Other notable names to watch include Thamires Vidal (5-1), a young bantamweight with a recent win over the PFL’s Martina Jindrova, and Ismael Bonfim (16-3), the brother of Gabriel Bonfim, who is riding a nine-fight win streak. The main card airs on UFC Fight Pass, with no announced broadcast plans for the prelims, although they historically are broadcast on the LFA’s Facebook page.

Jose Delano def. Jonas Bilharinho via Unanimous Decision (50-45, 50-45, 48-47) Delano was ineligible to win the LFA Featherweight Championship due to missing weight, so the belt remain vacant.

Gabriel Bonfim def. Eduardo Garvon via Submission (Arm Triangle Choke) at 1:19 of round 1 to become the LFA Welterweight Champion

Eduardo Neves def. Andre Vieira via Knockout (Punches) at 1:04 of round 1

Thamires Vidal def. Queila Braga via Submission (Heel Hook) at 3:36 of round 2

Rodolfo Bellato def. Thiago Vieira via Submission (Triangle Choke) at 4:58 of round 1

Mateus Brauns def. Inaildo Santos via TKO (Strikes) at 2:10 of round 1

Lincon Santos def. Marciano Ferreira via Submission (Rear Naked Choke) at 2:24 of round 1