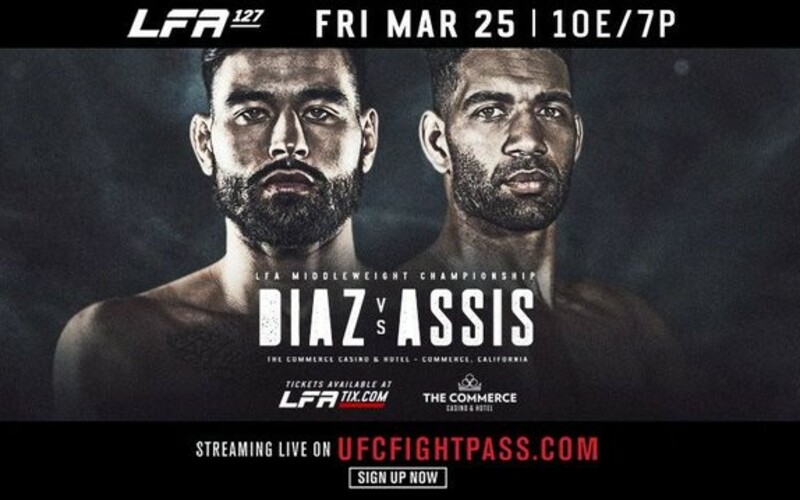 The Legacy Fighting Alliance (LFA) is set to return this Friday, March 25 at The Commerce Casino & Hotel in California. The card will feature a total of ten bouts with the main event being a fight for the vacant LFA Middleweight Championship between America’s Ozzy Diaz (6-1) and Brazil’s Bruno Assis (12-5). The co-main event is between Chase Gibson (10-5) and Javier Garcia (8-4) at featherweight. LFA 127 is set to begin at 10 p.m. ET/7 p.m. PT and will be streaming on UFC Fight Pass.

Ozzy Diaz, who trains out of California Mixed Martial Arts, will be looking to capture his fifth win in a row as well as the vacant LFA Middleweight belt. Diaz has finished all six of his opponents in his previous wins, with all of them being within the first or second round. His finishes consist of four TKOs and two rear-naked choke submissions. Back in the amateur scene, Diaz fought the current #7 ranked UFC light heavyweight Dominick Reyes (12-3) where he lost by submission, but it was relatively early on in his career. Diaz has never been to the third round in his professional career and he will look to keep it that way Friday night.

Bruno Assis, on the other hand, is riding a three-fight win streak with eight of his twelve wins coming via submission. Assis has fought the current #4 ranked UFC middleweight Paulo Costa (13-2) in 2015, where he lost by TKO, and was also featured on Dana White’s Contender Series in 2018 against the current #13 ranked UFC middleweight Andre Muniz (22-4), where he lost by Unanimous Decision.

One of Assis’s most impressive wins came against UFC’s light heavyweight newcomer and exciting prospect Jailton Almeida (15-3) back in 2018 by Unanimous Decision. Four out of five of Assis’s losses have come via TKO, it will be crucial for him to avoid Diaz’s power punches, especially early on in the fight, and work in submission threats of his own.

Chase Gibson, who fights out of the same gym as the previously-mentioned Ozzy Diaz, is looking for his second win in a row since joining the LFA in 2020. Gibson is also an alumnus of the Dana White’s Contender Series, where he fought current UFC featherweight Tucker Lutz (12-2) but lost via Unanimous Decision. Gibson has finished his opponents in his last three wins and is looking to continue his climb against Garcia on Friday night.

Javier Garcia is coming into this fight looking for his second win in a row as well. Out of his eight wins, five have come via submission as it seems to be his bread and butter.

The LFA 127 main card will also feature an interesting bout between Arnold Jimenez (7-2) and Josh Wang-Kim (4-0) at bantamweight. Jimenez is currently riding a five-fight win streak going into Friday night and hopes to keep it that way. Wang-Kim who actually went (14-1) as an amateur is looking for his biggest win to date. Wang-Kim has finished all but one of his opponents on the professional scene and finished 11 out of fourteen of his wins as an amateur.

Tommy Aaron (9-6) will face off against Kyrgyzstan’s Myktybek Orolbay Uulu (6-1) at lightweight which will make for an interesting matchup prior to the co-main event.

Also on the card, Karlee Pangilinan (6-1) will face off against Wascar Cruz (12-9) at flyweight. Pangilinan will be an exciting prospect to look out for. At 28 years old, his lone loss was to the current LFA flyweight champion Charles Johnson (11-2). Outside of that, Pangilinan has finished all of his opponents in his six professional wins.

The previously-mentioned fighters and so many others will be featured on this action-packed Friday night that fans will not want to miss. MMA Sucka will be providing live results along the way.