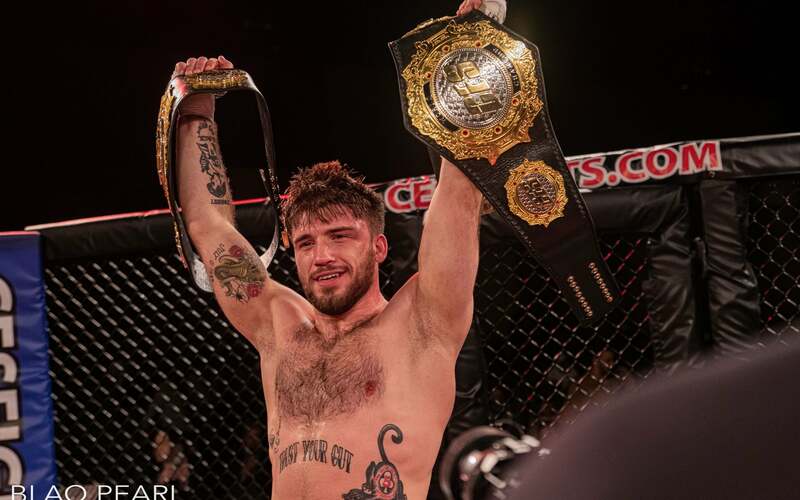 Billy Goff (7-2 MMA) accomplished a rare feat when he became a two-weight champion at CES 67 on April 1.

“I’m stoked about it,” Goff told MMASucka. “The biggest thing is, it’s a huge turning point for my career. It really sets me apart from everyone else. To do it in a month, bumping up a weight class on seven days’ notice. Only one other person in the entire promotion has had a belt in two different weight classes, so out of those two people, no one has done it like I have.”

The other CES two-weight champion is Matt Bessette, who won the promotion’s featherweight and lightweight titles in 2020 and 2021, respectively.

Sumter made appearances on the Dana White Tuesday Night Contender Series in 2018 and 2019. Goff believes defeating Sumter will be enough to get him noticed by a larger organization. Goff said it doesn’t make sense to do anything else other than take a step forward in his career.

“If PFL called and they wanted to do a big fight, I can get behind that if my coach thinks it’s right,” he said. “I ideally want the UFC. Nothing against Bellator; Bellator is a very good promotion, but if you want to be the best in the world, everybody goes to the UFC, so, that’s what I want.”

Goff knows making the UFC is tough, but he is aware of the Contender Series returning this summer. That’s where his opportunity may lie.

“I would ideally like to keep fighting and keep getting bigger names, bigger paydays, bigger venues,” he said. “Build on to what I can do. I ideally would like to make it into the UFC this year, but you never know.”

Goff said he would sign with Bellator if the promotion’s offer was “good” and his coach believes it’s the right move for him.

Wherever he ends up, though, Goff plans to compete at welterweight for the foreseeable future.

“Welterweight’s my weight class. That doesn’t mean I’m not going to go touch others. I can’t really picture a fight that brings me back down to 155, but I started there. That’d be a miserable cut. I could go back up to 185 again if it was the right fight, but that’s up to my coach. As of right now, I plan on just sticking with 170. I would ideally like to get bigger; I think everybody does.”

Goff started his professional MMA journey at 2-0 before he lost two consecutive fights, bringing his record to .500. Since then, Goff has won five fights in a row, become a double-weight champion for CES MMA, and finished Robson Gracie Jr. at Bellator 254. Goff attributed multiple changes to his lifestyle for the career resurgence.

He said he stopped being vegan after four years and got back to eating whatever he wants, and as a result, has gotten bigger, stronger, and had easier weight cuts.

Skill-set-wise, Goff has a new jiu-jitsu coach and is sparring with more guys. More time competing in the cage has helped, too.

A huge factor, Goff said, was changing his mindset.

“Mindset-wise, I was doing some things and keeping some people around me who weren’t great for me,” he said. “I wasn’t really prioritizing everything I needed to do to be the best in the world. There are a couple of shifts that I made that I think impacted my fighting career.”

With the 23-year-old Goff on a five-fight winning streak and everything falling into place for him, he hopes a call to the UFC is next.