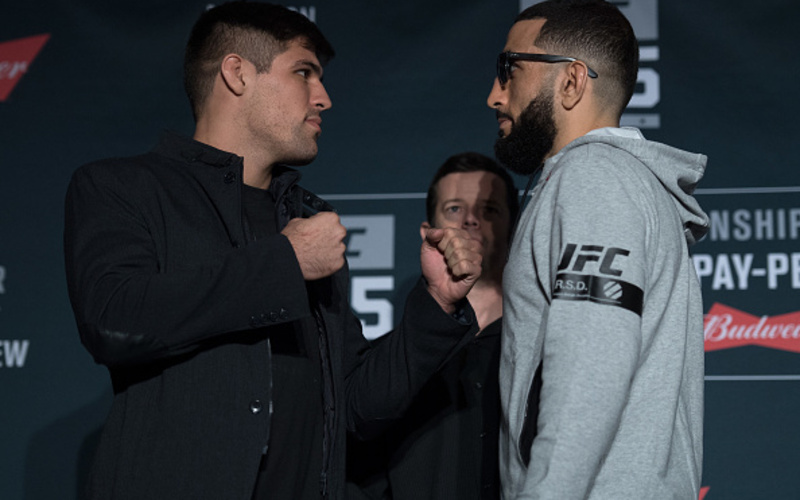 The UFC is set to return to the APEX for a major bout between two surging welterweights looking to rise through the rankings of the top 5.

It has been half a decade and a dozen fights since their first encounter, now with their rankings on the line and a statement to make for title contention. No. 5-ranked Vicente Luque takes on No. 6-ranked, Belal Muhammad once again.

Vicente Luque (21-7-1), came out the winner in their first encounter at UFC 205, winning by first-round knockout. Since then, Luque has won 10 of his last 12 fights and is currently on a four-fight win streak, where all four of his opponents have gotten finished.

What makes Luque’s streak eye-popping, aside from the finishes, is the way and the rate he’s defeating his opponents. Each time out in his four fights, he has won at a considerably quicker pace each fight compared to its last.

In that span, Luque defeated Niko Price, Randy Brown, Tyron Woodley, and Michael Chiesa. Quite a resume considering the progression Luque has displayed heading into this bout.

Belal Muhammad (20-3-1 NC) is no slouch either, having won 10 of his last 11 with one other fight being a no-contest against Leon Edwards, since that loss to Luque.

Now on a seven-fight unbeaten streak of his own, Muhammad is coming off the best stretch of his career as he has defeated Demian Maia and Stephen ‘Wonderboy’ Thompson via unanimous decision where he displayed a relentless pressure that wore down the two former title challengers.

It will be interesting to see who dictates the fight and imposes their style and will on the other in this rematch.

The welterweight division is in a fascinating position currently, with Khamzat Chimaev making a huge statement last week against a very game and dangerous Gilbert Burns in a Fight of the Night and Fight of the Year contender.

Colby Covington, having defeated Jorge Masvidal, awaits his next challenger, as UFC welterweight champion Kamaru Usman and Leon Edwards have a rematch of their own to settle. It will be very pivotal for the winner of this fight to make the impression a top-5 ranked title contender will need to do.