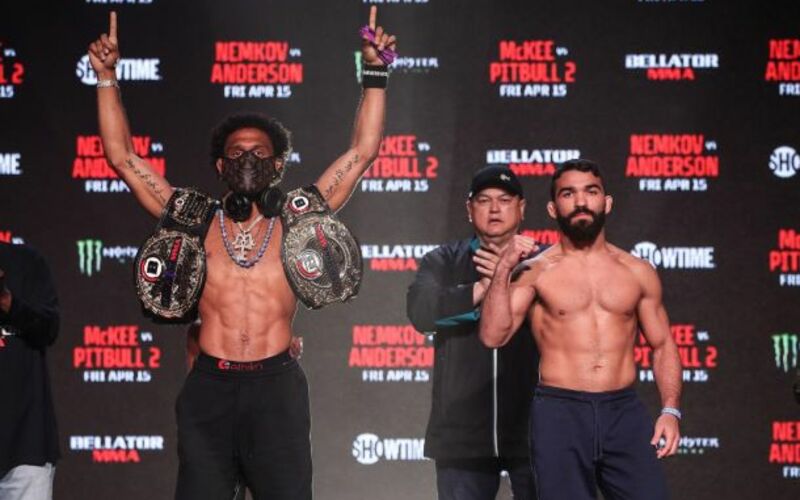 The most anticipated Bellator fight card of 2022 goes down this evening at the SAP Center at San Jose in San Jose, California. The card will be headlined by a rematch between former Bellator featherweight champion Patrício Pitbull and unbeaten, newly-minted champion A.J. “The Mercenary” McKee at Bellator 277.

The featherweight strap will not be the only title up for grabs; however, as Bellator light heavyweight world champion Vadim Nemkov is set to defend his title against former UFC contender Corey Anderson with an additional one-million-dollar grand prize up for grabs in the Bellator Light Heavyweight Grand Prix finals.

Linton Vassell def. Tim Johnson via TKO (punches) at 4:21 of Round 1

Tyson Miller def. Rhalan Gracie via TKO (Doctor Stoppage) at 0:00 of Round 1

Tyrell Fortune def. Rakim Cleveland via TKO (punches) at 1:38 of Round 1

Dovletzhan Yagshimuradov def. Rafael Carvalho via TKO (punches) at 4:04 of Round 2

Bobby Seronio III def. Calob Ramirez via KO at 2:14 of Round 2

Gaston Bolanos def. Daniel Carey via TKO (punches) at 4:59 of Round 1

Rogelio Luna def. Socrates Hernandez via TKO (punches) at 4:48 of Round 3

Laird Anderson def. J.T. Donaldson via submission (RNC) at 2:44 of Round 1