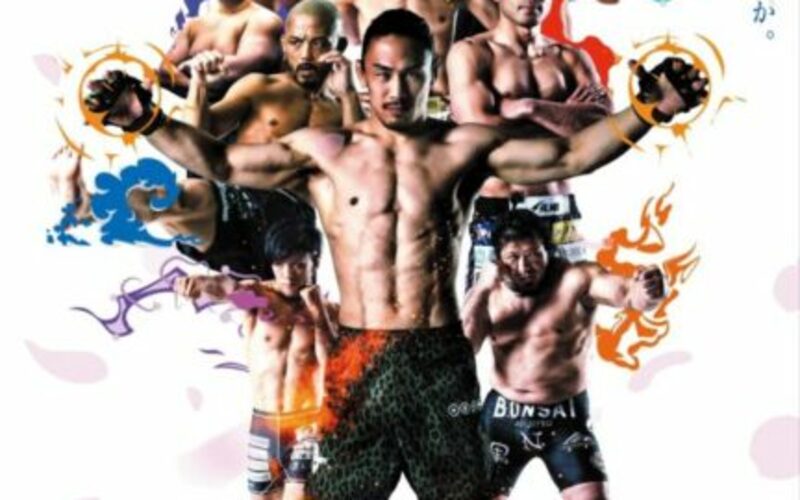 This is going to be quite a week for Rizin. Rizin has two back-to-back big shows from the Musashino Forest Sport Plaza in Tokyo that are going to be like the shows before the pandemic. More international foreigners are on the cards and there are some crazy fights including some big boy heavyweight matches. In this preview, we will look at the first show Rizin Trigger 3rd and some of the fights that will be on the show. 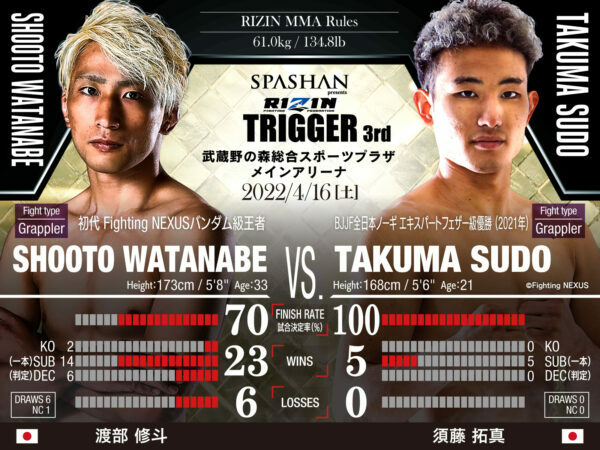 Two submission artists will test their MMA skills against each other at Rizin Trigger 3rd. Photo courtesy of Rizin FF.

This is going to be an exciting grappler versus grappler match.

Shooto Watanabe (23-6-6) is currently 3-2 in Rizin and has become known for finishing most of his opponents in his career by rear-naked choke. Coming from a martial arts family he has competed in Deep, ZST, and in Quintet. He is one of the most dangerous grapplers in Rizin and the best advice when competing against him is to “Protect yo neck!”

Takuma Sudo (5-0), 21, is young in his MMA career. He made his pro debut last year and is undefeated finishing all his fights by a variation of a leg lock. That is why he has earned the nickname “The Leg Hunter.” As he said during the Rizin Trigger 3rd press conference, “I don’t fight to knock people out. I fight to tap people out.”

Grappler versus grappler fights usually go one of two ways: Either an exciting grappling fest with great ground exchanges and submission attempts, or fighters are hesitant to grapple for fear of being submitted and have a poor striking exchange on the feet. Given that neither of these fighters are known for their striking, fans can expect to see numerous great grappling exchanges. These two both have different approaches to grappling. Watanabe has a more traditional approach to grappling with takedowns and trying to force his opponent down to take his back. Sudo is a new-age grappler who is all about the leg locks and heel hooks. Sudo also better knows that with Rizin rules, which allow soccer kicks, make leg lock attempts a much more high risk of submission to attempt. 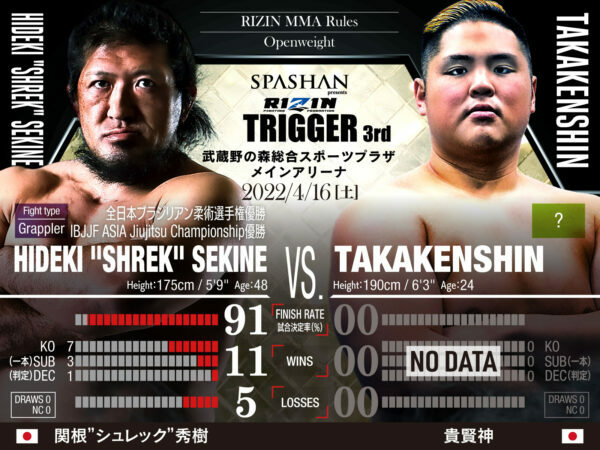 We’re going to have a potential old-school heavyweight slugfest in this fight. Photo courtesy of Rizin FF.

Here is the meme openweight fight of the night.

Pro wrestler and Bonsai Jiu-Jitsu fighter Hideki “Shrek” Sekine (11-5) may have had one of the most unexpected and emotional comebacks in heavyweight MMA last year. Shrek faced Shoma Shibsai at Rizin 33 and was getting dominated and almost finished for almost two rounds. Somehow, someway, Sekine made a reversal of fortune, was able to take down a very exhausted Shibisai and finish with ground and pound. Sekine is not the best fighter, but he certainly makes up for it with grit and heart. “I want to keep showing the appeal of pro wrestling, and the strength of a 40-year-old old guy,” Sekine said. “I will need to face [Takakenshin] with courage, tears and love.”

What is there to say about Takakenshin (debut)? Honestly nothing. The former sumo and twin brother of Rizin fighter Tsuyoshi Sudario is making his debut. He is training under Tsuyoshi Kosaka at Team Alliance. He will definitely have the size advantage. Can he repeat the success that his brother is having or will he enter the already large pantheon of unsuccessful sumo fighters turned MMA fighters?

Clearly, Sekine should have the advantage in this fight given he has tons of experience in grappling, striking, and the MMA game. Sekine has also shown that he has a strong fighting spirit. Even if he gets exhausted as the fight goes on, he still has enough fortitude to push forward.

Takakenshin needs to know he will need to pick and choose his spots against Shrek. Shrek is an accomplished ADCC-level grappler and has strong hands. If Takakenshin wants to dominate he needs to fight like Baruto did when he was in Rizin. He will need to use weight and sumo holds to smother Shrek. He also cannot tire himself out; if he expels too much energy then he will get tired himself and likely lose very quickly. 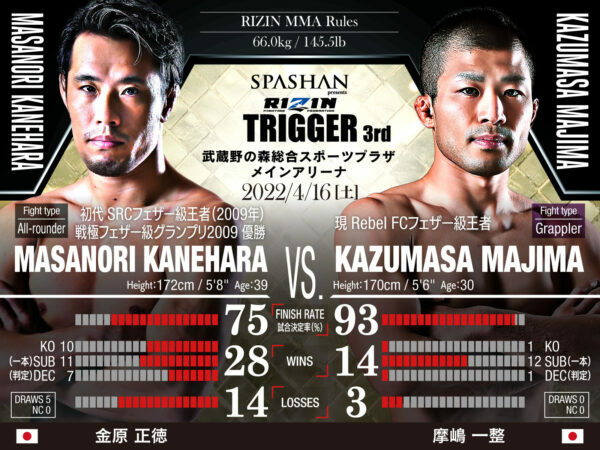 Two strong grapplers who come in to finish will clash in this fight at Rizin Trigger 3rd. Photo courtesy of Rizin FF.

Masanori Kanehara (28-14-5) had initially announced his retirement after his loss to Victor Henry at Rizin 21. After some time off, he announced his return to MMA and went up to featherweight. In his return match, he made easy work of Takahiro Ashida, finishing him in the second round. Kanehara is a UFC veteran with wins over Alex Caceres and The Korean Zombie. “I’m a much better fighter than Majima,” Kanehara said. “He’s decent but I’m better than him.”

Kazumasa Majima (14-3) is looking to get his first win Rizin. His two other Rizin fights resulted in him being finished both times. Majima has finished all but one of his wins. He is always looking to submit his opponents with his strong grappling skills. “I’m honored that [Kanehara] called me out and I plan to use him as a stepping stone to work my way up the rankings,” Majima said.

Both fighters are extremely well-rounded with their main expertise being in grappling. Both have strong submission skills and can end a fight quickly if it gets to the ground.

Kanehara is going to have the advantage on the feet. He has TKOed multiple opponents and going up in weight has seemingly made his stand up even stronger. That could be his best strategy to win against Majima.

Majima’s ground game is very strong. While Kanehara is a great grappler, he could be very well outmatched by Majima if he is forced to fight a grappling match. Majima will need to use heavy pressure on Kanehara. 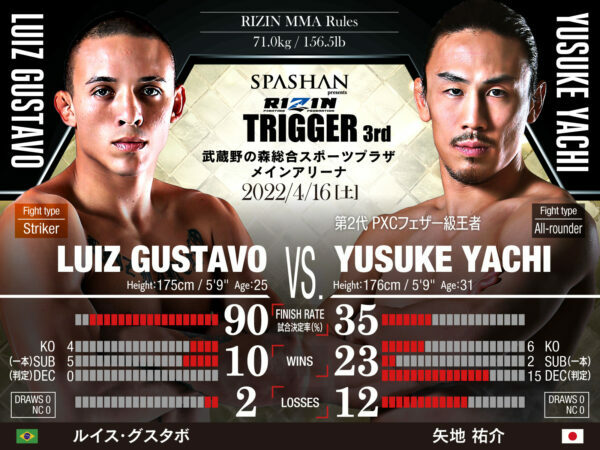 A rematch that could mean a turnaround for either fighter as both are coming off losses. Photo courtesy of Rizin FF.

The main event features a rematch over three years in the making.

Luiz “Killer” Gustavo (10-2) definitely has earned that nickname. His wins are all finishes and he is an extremely aggressive fighter. He is not afraid to brawl and he has adequate submission skills to finish that way. He will be making his return to Rizin after over two years away. “I have been told that Yachi has changed his style but I don’t see much of a difference,” Gustavo said.

Yusuke Yachi’s (23-12) career in Rizin has been faced with ups and downs. He came into Rizin in 2016 and went on a five-fight win streak. Then he went on a three-fight losing streak. He switched camps and dubbed his comeback Yachi 2.0 and got a title shot against Rizin lightweight champion Roberto “Satoshi” de Souza after some wins. He was not successful in his title challenge. With this fight, he looks to start another comeback against the fighter who started his string of bad luck. “Gustavo started my losing streak and I’ve been wanting this fight for a long time. And now it’s finally happening so I plan to dominate in all aspects and pay my debt that I owe him,” Yachi said.

In this rematch, the question is how either fighter is going to approach the other. Yachi has fought in a less aggressive, more deliberate style in his fights of recent. That is how Mikuru Asakura was able to beat Gustavo. Trying to brawl with Gustavo will just get Yachi knocked out again. Gustavo also has not fought in close to two years. He will need to tire out Gustavo and push the pace so that Gustavo’s heavy hands become soft as the fight goes on. Also, Yachi better make sure his hair is tied back.

If Gustavo is hungry for a win, then Yachi will be the best person he could have gotten. In their first fight, despite being outsized by Yachi, he was able to outstrike significantly before delivering a cross that knocked out Yachi cold. Yachi is a much more tentative and cautious fighter now. Gustavo will have to take advantage of that. Make Yachi uncomfortable, hesitant, and walking backwards.