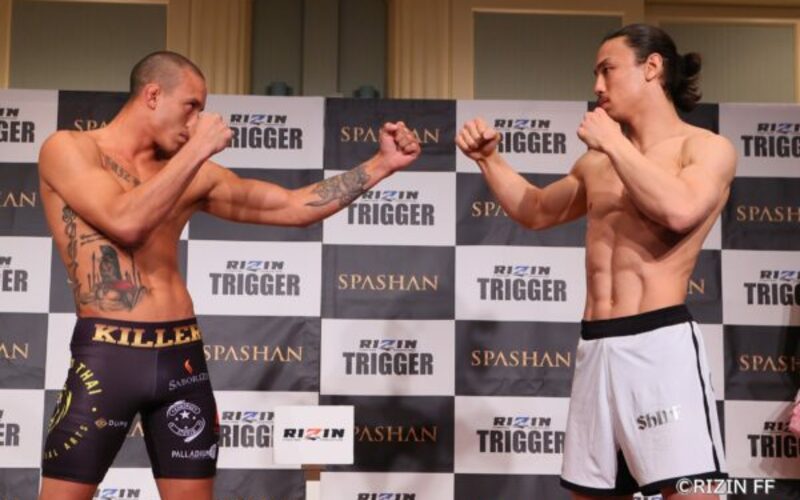 It is a doubleheader Rizin weekend. Both Rizin Trigger 3rd and Rizin 35 also might signal an end to the pandemic era of the promotion. The cards feature more higher-level talent as well as international fighters. The first show of the two shows, Rizin Trigger 3rd, will be main evented by a rematch two years in the making. From the Musashino Forest Sport Plaza in Tokyo, the 8 fight card (1 kickboxing and 7 MMA) will be available with English commentary. Let’s look at some of the fights.

Yusuke Yachi (23-12) and Luiz Gustavo (10-2) are both coming off losses and looking to get back in the winner’s circle. As well Gustavo is returning after an over two-year layoff. These two faced off against each other at Rizin 12 with Gustavo being a late replacement and going up a weight class. Gustavo wont the fight by knockout in round two and started Yachi’s long losing streak in Rizin. Yachi is sporting white trunks this time. We have gotten “Krazy Bee” yellow shorts Yachi. When Yachi changed camps and coaches we got black shorts Yachi 2.0. Will this Yachi be a new Yachi? Perhaps Yachi 3.0? Or is Gustavo going to repeat the success he had in their first matchup?

In the presumed co-main event, Hideki “Shrek” Sekine” (11-5) will look to introduce former sumo now making his pro-MMA debut Takakenshin to the sport. The original co-main event was supposed to be Kintaro (14-11-2) vs Kazuma Kuramoto (9-2) but on the day of weigh-ins Kintaro injured his back and the fight was canceled. Masanori Kanehara (28-14-5) looks to continue success at featherweight against Kazumasa Majima (14-3). Majima is looking to get his first win in the promotion.

If you are looking more in-depth preview of the show, check it out here.

If you would like to see our write-up of some of the fight announcements, check it out here.

Rizin Trigger 3rd is available on Live-Now with English commentary as a single purchase or bundle with Rizin 35.