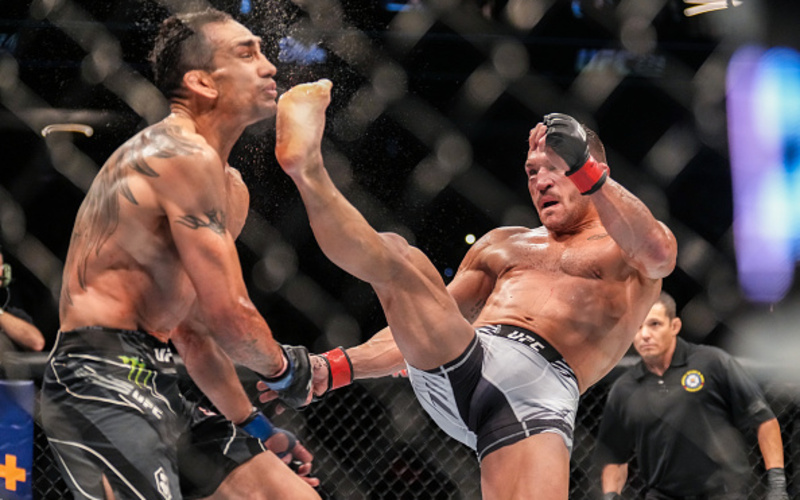 Former Bellator champion and current UFC top lightweight contender Michael Chandler earned a highlight reel KO victory over Tony Ferguson at UFC 274. Not only will this KO be talked about for ages, it may lead to another big fight as he called out many big names after his stunning victory. The discussion of his potential opponents has continued to spark interest and social media followings.

Here is a look at Michael Chandler’s options for his potential next opponent:

Chandler voiced his desire to battle the former lightweight and featherweight champion, Conor McGregor, during his post-fight interview with Joe Rogan. The former Bellator title holder, usually fighting at 155 pounds weight class, even said that he would be willing to go up to 170 pounds to make McGregor’s decision to fight him an easy one. This comes as no surprise since McGregor continues to be the sport’s biggest star. For Chandler to share the Octagon with him would bring a new status level for the former Bellator champion. Chandler and UFC President Dana White expressed that this fight would be very exciting and could easily be a contest the fans could get behind. McGregor himself said that he has an interest in this possible bout. However, White said that the brass doesn’t expect the former UFC champion to make an appearance anytime soon. This most likely means Chandler vs. McGregor will not happen in the immediate future.

Along with McGregor, Michael Chandler called out the winner of the UFC 274 main event between Charles Oliveira and Justin Gaejthe citing that there would be some intrigue in a rematch with either one. He noted that his first bout with Oliveira was received with such praise with Chandler having success in the first round despite losing via TKO in the 2nd round back in UFC 262. He also battled Gaethje gallantly for three rounds in a Fight of the Year performance in UFC 268. The winner of the main event would turn out to be Charles Oliveira, who, as Chandler stated in his post-fight presser, that their story together isn’t complete yet. A rematch with the No. 1-lightweight in the world would be very entertaining. However, Chandler just broke his two-fight losing streak with this spectacular win and more contenders seem to be closer to getting a chance at the title before him.
Embed from Getty Images

HOUSTON, TEXAS – MAY 15: Charles Oliveira of Brazil and Michael Chandler exchange punches during their Championship Lightweight Bout at the UFC 262 event at Toyota Center on May 15, 2021 in Houston, Texas. (Photo by Carmen Mandato/Getty Images)

The fan-favorite Nate Diaz took to Twitter to voice his desire to fight the UFC 274 winner and just like that, Michael Chandler now has the possibility to battle the Stockton fighter at 170 pounds. Even though Nate Diaz’s call-outs to many fighters didn’t amount to any real fights, the possibility of a Chandler fight does seem more feasible because both men seem to want the contest. Chandler wants to be in big action fights with big names and Diaz wants a fight with a bigger name that he can gain something with a win. The one thing that can possibly stop this fight from becoming a reality is Diaz’s testy relationship with the UFC brass.

Surprisingly, Michael Chandler did not mention the former lightweight interim champion Dustin Poirier in his post-fight interview or his post-fight presser. Poirier even noted that Chandler had not mentioned a contest between the two even though the former interim champion stated on Twitter that he had interest in fighting the winner of Chandler and Ferguson. Recently, Chandler has told Ariel Helwani on “The MMA Hour” that he simply forgot to mention Poirier and alluded his reasoning to Poirier discrediting Chandler getting a title shot at UFC 262. Even though Michael Chandler isn’t so keen to the contest, there would be so much to gain in a fight with Poirier. Poirier is known for his action-heavy fight that Chandler desires and Poirier is still highly ranked in the top five, winning seven of his last nine. In this writer’s opinion, I feel this contest is the most realistic, especially if the previous possibilities do not come to fruition.

Enjoys MMA, golf and is a big comic book nerd