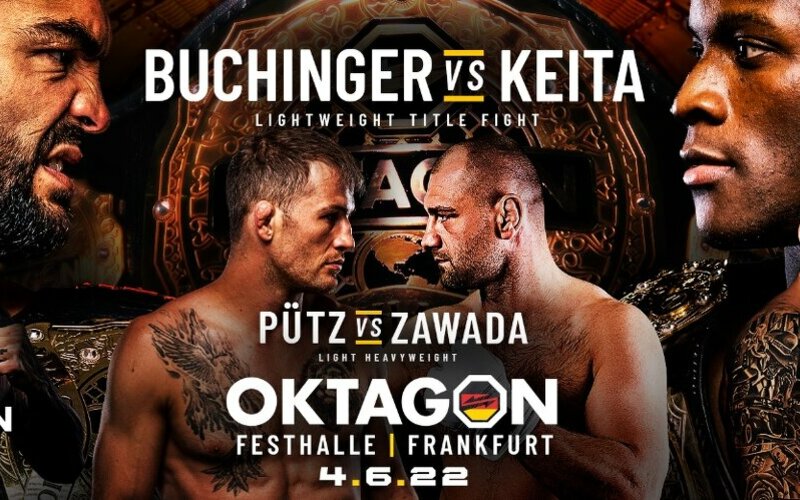 The main event puts the OKMMA Lightweight title on the line as reigning lightweight and featherweight champ-champ Ivan Buchinger defends his belt against fresh-face, Oktagon Lightweight Interim Champion Losene Keita. After winning the belt from previous champ Ronald Paradeiser via a first-round submission, the Slovakian has since successfully defended the belt once – after surviving five-rounds against Vojto Barborik. Keita, on the other hand, debuted at Oktagon in late 2021 on a clean 6-0 record, one that he has been able to maintain after defeating Karol Ryšavý. The challenger rides a 7-0 record after defeating Paradeiser this February.

OKTAGON 33’s co-main event pits German MMA veterans against each other in a light heavyweight battle. Frankfurt’s own Stephan Puetz butts heads against Martin Zawada, who’s last name may be familiar to fans of the UFC. Both men enter the cage on a single loss streak, with former-GMC champion Puetz suffering a doctor stoppage due to a broken nose caused by champion Viktor Pešta late in the third round. Zawada, on the other hand, debuts tonight at OKTAGON 33 after a stint at KSW – the last of which was a unanimous decision loss against Poland’s Szymon Kołecki.

However, just before the main events kick off, we have the highly-anticipated bout between prominent German MMA star Christian Eckerlin, who faces Denilson Neves de Oliveira at welterweight. Eckerlin, alongside Puetz and Zawada, is one of Germany’s longest-running MMA stars and also one of the most brutal. He currently rides a seven-fight win streak, with his most recent win being that of his debut submission victory over John Palaiologos. On the other side of the cage is De Oliveira, a Brazilian submission artist who will be debuting at Oktagon riding a two win streak.

Kicking off the main card is Martin’s brother, former UFC welterweight contender David Zawada who also debuts at Oktagon up against fellow debutee, Austria’s Erhan Kartal. OKTAGON 33 will be the first time the younger Zawada brother has competed in MMA since his removal from the UFC roster back in February. He comes into Oktagon on a two-loss streak, with decision losses against Ramazan Emeev and Alex Morono at the UFC. Across the cage, Kartal also debuts at the European organization – riding a single-fight win streak. The Austrian last fought in September 2021, gaining a knockout win against Luis Silva at GMC.