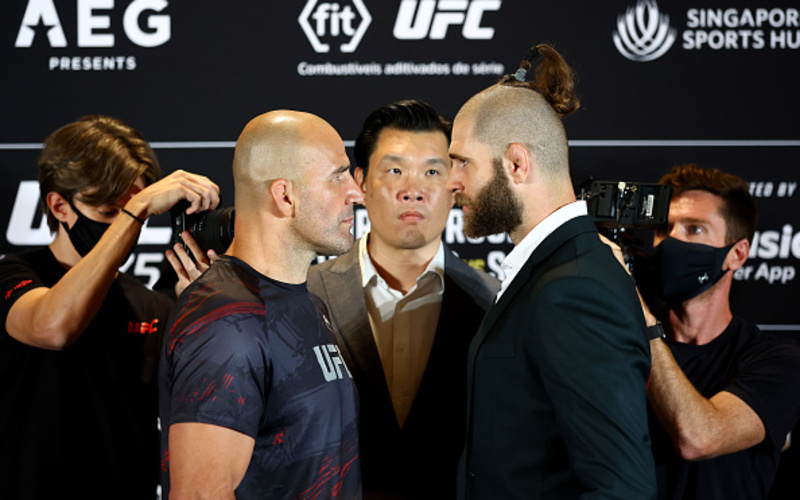 UFC light heavyweight champion and fan-favorite Glover Teixeira will make his first title defense against a rising star in Jiri Prochazka at the main event of UFC 275. Here we discuss the odds and analysis from a betting perspective.

After years of grinding against top competition in the division, Glover Teixeira shocked the world by claiming the UFC lightweight title by second-round submission at UFC 267 in Abu Dhabi. At the age of 42, Teixeira became the oldest first-time UFC champion in history and did so as a +245 underdog.

Though he has only two fights in the UFC, Jiri Prochazka has been a rising force in mixed martial arts, having won the Rizin light heavyweight championship in 2019 over King Mo Lawal (TKO Rd3) and defending it against former Division 1 All-American wrestler and longtime UFC veteran C.B. Dolloway (KO Rd1, 2019) before vacating the title to sign with the UFC.

At 29, Prochazka is 13 years younger and has an inch height and four-inch reach advantage over Teixeira, averaging 7.19 significant strikes landed per minute (SLpM) with a 52 percent striking accuracy, 6.80 strikes absorbed per minute (SApM) with 48 percent striking defense, 0.98 takedowns per 15 minutes with a 100 percent takedown accuracy, 50 percent takedown defense and 0.0 submissions per 15 minutes, according to UFC Stats.

Prochazka has had two fights and two devastating knockouts in the UFC so far, over Dominick Reyes (Rd2, 2021) and Volkan Oezdemir (Rd2, 2020).

Glover Teixeira has been consistently disrespected and underestimated against perceived higher-level competition, closing as a +245 and +207 underdog in matches where he ended up finishing his opponents, and he continues to be disrespected and undervalued with the current betting line against Prochazka.

Bettors who are backing the dog might have faith in Teixeira’s superior grappling ability and ability to finish if the fight hits the mat, his underrated overhand right to left hook combo that is likely to penetrate Prochazka’s middling striking defense, and they would be accurate in claiming that the betting value resides on Teixeira.

Prochazka is one of the more hyped prospects in the organization and those confident in his chances to win this Saturday see him as a transcendent striker whose youthful energy, violent power and unorthodox footwork as too much for his aged opponent.

Glover Teixeira is a legend of the sport, a sure-fire Hall of Famer whose legacy is set no matter what happens this weekend. Mostly everyone loves an underdog story and were thrilled when Teixeira captured UFC gold as a 42-year-old, and they would likely be thrilled if he could defend his title as a fairly big underdog against the upstart Prochazka.

But for the most part, MMA is a young person’s game, where power, flexibility, quickness and endurance favor the victor and are found more abundantly in younger rather than older fighters. Experience and technique are also important qualities which Teixeira possesses in spades, but an age difference that leads to a significant discrepancy in power, flexibility and quickness could obviate experience or technique advantage, though it is not evident that Teixeira has a significant experience or technique advantage over Prochazka.

Though it could be hindsight or an excuse, Jan Blachowicz said he woke up on Abu Dhabi on the day of his fight against Teixeira knowing he was going to lose. Whether this is true or not, Blachowizcz indeed looked sluggish and passive for the entirety of his contest at UFC 267. His UFC Vegas 54 win over Aleksandar Rakic by Rakic tearing his ACL in the following fight was not a very convincing victory either.

Teixeira’s win over Santos also has not aged that well, as Santos appears to be on the decline, leading to questions about whether Teixeira’s recent wins might be overrated.

Glover is absolutely live for a submission at any time of this fight, even after he appears to be rocked from strikes, if he can keep Prochazka on the ground for any extended period of time, and bettors considering Teixeira might extract more value by taking him by submission.

But just as the clock struck midnight for Cinderella, there is only so long that Teixeira’s age, and its effect on his head movement and footwork, will not prove to be a vulnerability against a dynamic, powerful striker as it has against Alexander Gustafsson (KO Rd5, 2017) and Anthony Johnson (KO Rd1, 2016).

Jiri Prochazka is a higher volume, more unorthodox and violent striker than anyone Teixeira has recently beaten in the UFC, and has championship experience to help guide him through the pressure and adversity of a title fight.

Teixeira will likely shoot for a takedown after being rocked in this contest but look for Prochazka’s flexibility and pugilistic energy to make it hard to keep the Czech down for long, and as long as this fight remains standing, Prochazka will batter Teixeira’s cranium before sending him to the shadow realm.