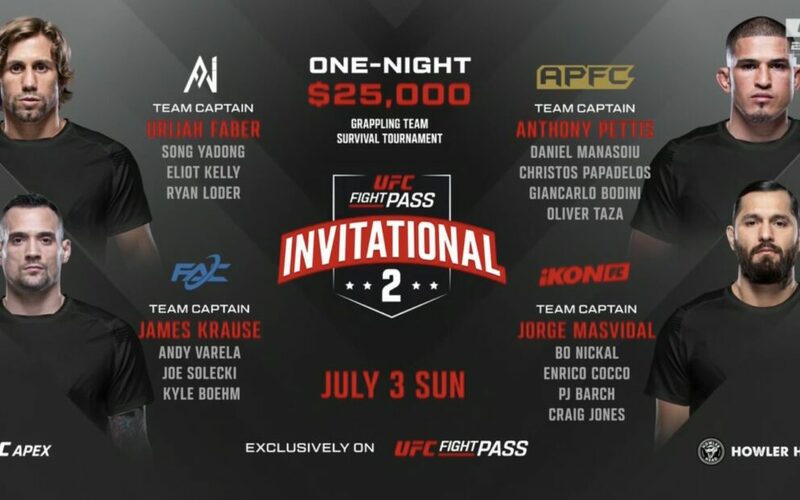 International Fight Week 2022 will come to an end on Sunday with the second-ever UFC Fight Pass Invitational.

UFC Fight Pass Invitational 2 will be a four-team Brazilian Jiu-Jitsu tournament with elimination rules. Teams will be comprised of four competitors, with the winning team receiving a $25,000 cash prize.

Teams will start the competition paired off against another team in a semifinal format. Two men from each team will grapple with the winner remaining on the mat to face another member of the other team. In the event of a draw, where no submission is completed after eight minutes, both grapplers are eliminated. If both teams have an equal number of competitors at the end of the round, judges will render a decision for the winner. The last team standing will move onto the championship round where the same rules will apply.

Teams are comprised as follows:

Semifinal Round – APFC vs. FAC

Semifinal Round – A1 vs. iKON

Eliot Kelly (A1) vs. Bo Nickal (iKON) ends in a Time Limit Draw

Rafael Domingos (A1) vs. Jay Rod (iKON) ends in a Time Limit Draw

Enrico Cocco (iKON) vs. Ryan Loder (A1) ends in a Time Limit Draw

Final Round – APFC vs. iKON