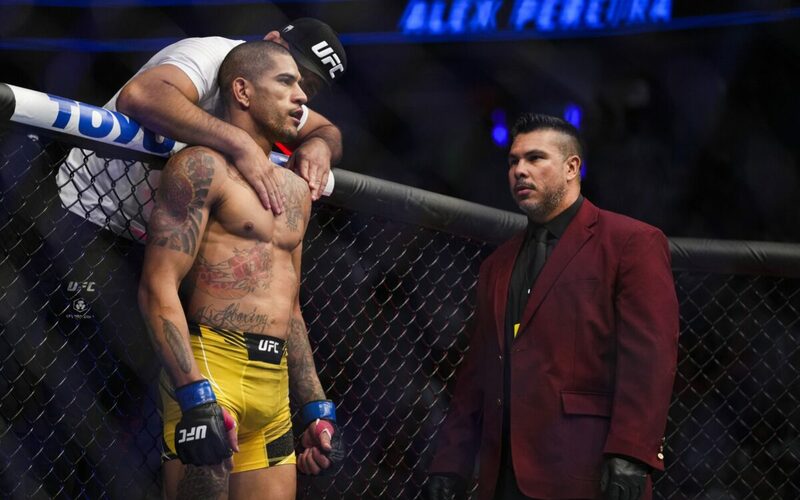 Alex Pereira came out with the biggest win of his MMA career as the Brazilian stopped Sean Strickland at UFC 276. Thanks to this knockout win the Brazilian could find himself in a title picture with a matchup against the reigning champion Israel Adesanya being in the works for the future. Meanwhile, another rising UFC star, Khamzat Chimaev, set his crosshairs on Pereira while his potential face-off against Nate Diaz is being discussed.

‘Borz’ called out UFC to arrange his clash against Pereira using his social media:

I’m want to fight with this guy @ufc @danawhite let’s make it 👊🏼💥 https://t.co/ao2fKbLCqq

This didn’t go unnoticed by ‘Poatan’ who replied to the call out during his interview published in the latest edition of  Trocação Franca podcast:

“Look at this guy. I’m going to fight for the belt, it’s guaranteed. He wants the attention. ‘Oh, I wanna fight this guy.’ He knows I’m the next contender and he still says something like that. I’d like to see [what he would do] if Dana White came out and said, ‘Alex, your shot at Adesanya is guaranteed but he wants some time to prepare, so fight this guy first because he wants to fight you. Your title shot is still guaranteed.’ Let’s see what he would say. [Chimaev] wants attention because he knows it doesn’t make sense. I’m going to go back and fight him when I’m already guaranteed for the belt? He wants attention, but he’ll have to take a number and go back to the line.”

Pereira has some history with Adesanya, as he’s the only man who was able to knock out ‘The Last Stylebender’. It all happened in a kickboxing bout at Glory of Heroes 7, where Pereira shut Adesanya’s lights out with a left hook in the third round. Now the Brazilian switched to MMA, where he has a 6 – 1 professional record and rides a five-fight winning streak.

Chimaev is unbeaten in an MMA competition as he sports an unblemished 11 – 0 record. In his most recent fight at UFC 273 he defeated Gilbert Burns by a unanimous decision. This marked the first time when ‘Borz’ went full distance, as he finished all of his previous opposition before the final bell.