Why the UFC SHOULDN’T Have Made Khamzat Chimaev vs Nate Diaz: Opinion 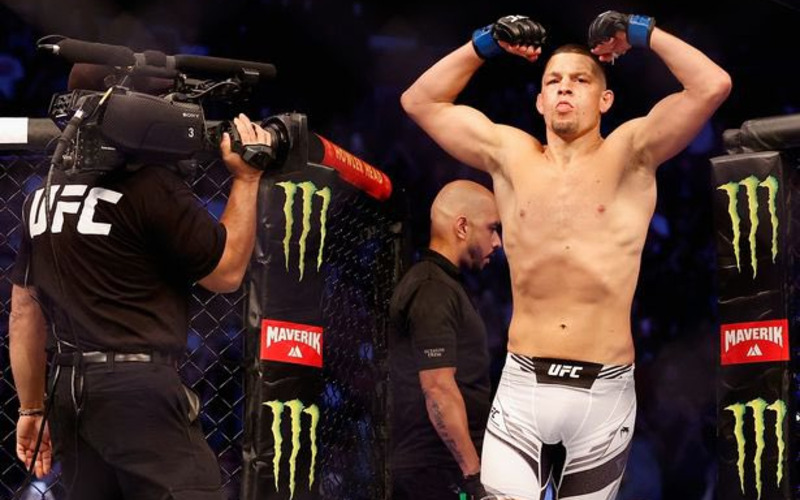 The UFC recently confirmed that Khamzat Chimaev and legend of the sport Nate Diaz are set to headline UFC 279 on Sept. 10.

A quick look on Twitter or in the YouTube comments will reveal that despite many fans being excited for the contest, many feel that the fight doesn’t make sense and is a strange pairing for both men at this stage in each of their respective careers. It is not hard to see why many fans share this mindset.

Reason to make the fight

The sole reason for making this fight is undoubtedly the hype and interest that it will generate. This is obvious and no one can question that this fight would be among the biggest of the year if it were to happen. Khamzat Chimaev is undisputedly the breakout star of the last 12 months in the organization and any fight that he takes part in now is going to draw plenty of eyes. Pair him with one of the biggest draws in the history of the sport in Nate Diaz and imagine all of the press conferences and general media obligations, and it is easy to see that the build-up for this fight would be huge, almost on the level of a Conor McGregor fight. When you look away from the hype-generating finance side of the fight however, there are very, very few reasons that make sense to justify this fight being made.

Nate Diaz is on the cusp of retirement. This is the last fight on his UFC contract and it does not look likely that he will sign another deal with the promotion anytime soon. He is now 37 and made his debut in the organization back in 2007 – 15 years ago – at the age of 22. His signature Diaz grit and toughness has seen him take huge amounts of damage in such a long career and he was already an experienced veteran of over 20 UFC fights by the time he achieved mainstream popularity with the win over McGregor in March 2016.

That was six years ago now and in the years following his duo of bouts with the Irishman, Diaz has fought just three times since. A decision win over Anthony Pettis and then being on the wrong end of two brutal beatdowns by Jorge Masvidal and Leon Edwards respectively.

Diaz is well past his prime, and you could argue that he was past his prime when he fought McGregor all those years ago. Since being defeated by Benson Henderson in his only title shot ever with the company in 2012, Diaz has had exactly 10 fights. He has a perfect equal record of 5-5. This is not the type of record one would expect from an elite-level fighter in the UFC. Indeed, this paired with his most recent bouts shows that Diaz is a long way away from the pinnacle of the sport and has been for some time now, and while he may be among the most popular fighters in the company, he is far from being the most skilled.

While Diaz has been on a slow decline, his future opponent Khamzat Chimaev has had a meteoric rise. Coming off a fight of the year contender with Gilbert Burns, Chimaev’s stock has never been higher. He has demolished opponents on his way to the top of the welterweight division and one would imagine that he will be next in line for the title shot after the events of Kamaru Usman vs Leon Edwards 2 play out.

Chimaev has shown that he is not simply a hype train after the win against Burns and is clearly one of the top dogs in the division. This is what has puzzled the public when it comes to him fighting Diaz. What does Chimaev have to gain from this fight? The initial answer will be another big name to his record and will of course be part of one of the biggest fights of the year. Yes, this is true. But also if Chimaev wins this fight he will only be fulfilling what people already expected of him.

Twice now we have seen Diaz square off against top contenders at the welterweight division. Masvidal and Edwards both totally outclassed the Stockton fighter who found little to no success in the fights (except for that memorable fifth round against Edwards) and suffered heavy damage in both contests. Simply put, we have already seen what happens to Diaz when he faces elite competition at welterweight and it never ends up going well for him.

Of course, styles make fights and every fight is different, but are we really supposed to expect that Diaz has any chance against Chimaev when we have seen him be dominated by fighters who most believe Chimaev is at least on an equal level with or perhaps even slightly above. It is not a compelling or competitive match-up. In fact, the risk to Chimaev is far greater than the reward, because if he fails to deliver an impressive victory or even does the unthinkable and manages to lose, his stock will be severely affected and he may go from being on the cusp of a title shot to having to prove his status as a top welterweight all over again.

No matter what happens on September 10th, Nate Diaz is one of the most GAME fighters we’ve ever seen.👏

In the end, Chimaev vs. Diaz makes sense from a monetary perspective. When you strip all that financial reasoning back and look at it from a solely matchmaking point of view, you see how flawed the match-up truly is. Neither fighter has much to gain from this fight aside from money.

A win by Chimaev will undoubtedly be discredited as him simply beating up a washed-up Nate Diaz and a poor performance could potentially damage his credibility in the future. Likewise, Diaz, (in what will be his last fight in the UFC) will more than likely be on the receiving end of a vicious beatdown in a fight that, realistically, he has little to no chance of winning.

A different route they could have gone down with Diaz would have been treating him as they have Robbie Lawler. Lawler is a legend of the sport, a former champion who is in the twilight years of his career and obviously is no longer able to face off against the best in the division. Yet the UFC matches him up against fighters with a style that suits him and are of a skill level that he will be able to hold his own against. For example his recent fight against Bryan Barberena.

In fact, I believe that Nate Diaz vs Robbie Lawler would have been the perfect fight to finish off Diaz’s career. Two legends of the sport, both would be willing to trade punches, and both are fan favorites. There could even have been a storyline involved with Nate stepping to take on Lawler and get revenge for defeating his brother, Nick, last year.

Unfortunately, this was not the route the UFC chose to go down and it looks like UFC 279 will definitely be headlined by Chimaev vs Diaz, for better or worse.