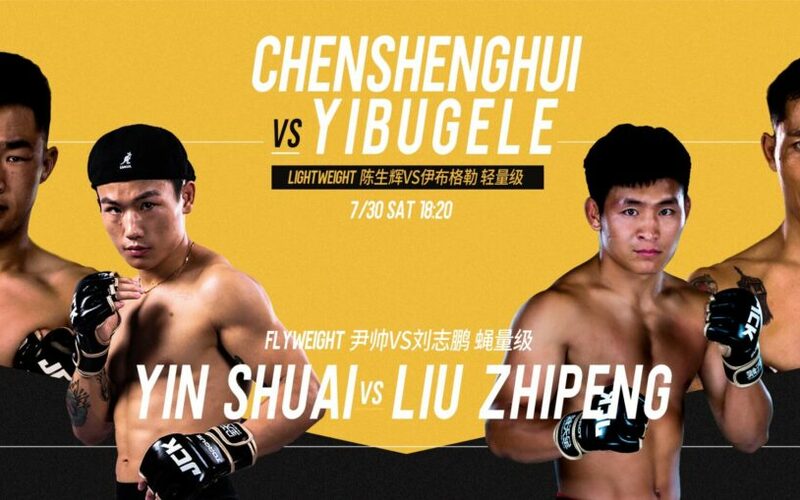 JCK’s 2022 season is now halfway through the summer, and the cards continue to grow in quality. Winners from the 2021 season make their second appearances of the current season as the action goes down from Haikou island in China, in the first of two events this weekend. Stay tuned here for JCK Fight Night 2022: Week 13 results.

The main event of today’s JCK event features a rematch from the lightweight semifinals of the 2021 season, as Yibugele (20-11-1) fights Chen Shenghui (5-3). After opening his career with a two-fight skid, Chen Shenghui clearly figured some things out in his MMA career. JCK brought him in for their 2021 season, where he fought brutally strong competition despite his relative experience.

Nevertheless, Chen won three straight, highlighted by underdog wins over Chinese journeymen Nuerdebieke Bahatihan and Husile. In the semifinals, he ran into Yibugele, the violent Mongolian, who broke Chen Shenghui’s win streak with a second round liver kick.

Yibugele would go on to win the championship last year, but Chen realizes how close he was to winning one million Yuan and has vocalized his faith in himself to finally stop Yibugele. He successfully made a return to JCK’s 2022 season last month with a unanimous decision over Zhao Guoan.

Yibugele is riding the peak of his long career on his way to a second million Yuan. He is also 1-0 in the season, beating Danier Nuerboli by decision last month. The fight will mark Yibugele’s 33rd pro fight in seven years as a pro, as he looks to extend his win streak to five.

Rest of the Card: Yin Shuai Back up to the Plate

Also on the card is bantamweight champion Yin Shuai (14-3) of Jiangmen against Liu Zhipeng (7-7) of Xi’an. This fight is also a rematch from the second round of the 2021 season, where Yin choked out Liu in the first round. Yin has emerged as one of the top prospects out of all of China, on a seven-fight win streak and pounding out Li Peng last month.

Also on the card is BJJ specialist Cai Xiongxiong (10-5), and Xinjiang native Kuerbanjiang Tuluosibake (22-16) gets back to work as well. Kuerbanjiang had to drop out of the 2020 season after two wins due to injury, and returned with a win in the 2021 season finale.

Yibugele def. Chen Shenghui via TKO (Left Hook to Punches) at 2:52 of round 1

Cai Xiongxiong def. Li Peng via TKO (Right Hook to Punches) at :54 of round 1

Bai Tao def. Yisimayili Muhetaer via TKO (Arm Injury) at 2:38 of round 2