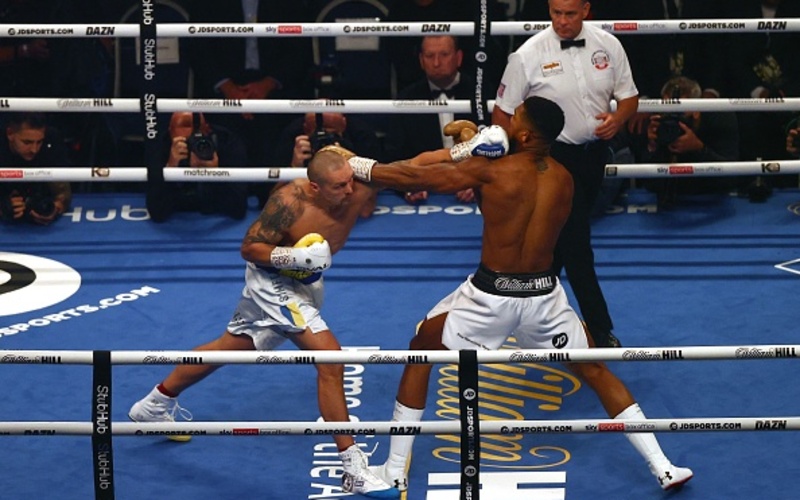 “Usyk is the better fighter and I just don’t see how AJ can make the adjustments to beat Usyk, I don’t see it,” Ukrainian boxing promoter Dmitry Salita said this week regarding the upcoming Oleksandr Usyk vs Anthony Joshua II heavyweight boxing fight. On August 20 live from King Abdullah Sports City, Saudi Arabia Anthony Joshua will look to avenge his loss and reclaim his titles. The IBF, IBO, WBA, and WBO heavyweight titles will be on the line in this match. Standing in Joshua’s way is the incredibly skilled Ukrainian-born world champion Oleksandr Usyk.

“Usyk is a very experienced fighter, had a tremendous amateur career, and is an Olympic gold medalist.” Salita continues, “He has been taught the science of boxing as a kid and really knows boxing like a scientist, on a scientific level. He’s a boxing master, one of the most educated boxers in the world, maybe even of all time. He’s really, really well educated in terms of the sweet science.”

“The Cat” Usyk in 2012 had the honor to represent his home country of Ukraine in the Olympics. As a heavyweight, he took home a gold medal from London. Shortly after he made his professional debut and has since earned a perfect 19-0 record. Most recently, uncrowning Joshua in September of 2021. Unsurprisingly, Usyk is a proud patriot of Ukraine and is using his platform to help raise funds for humanitarian efforts in his home country.

Salita explains that AJ’s best chance in this match might come in the form of Usyk’s patriotism. “The only thing that AJ has in his favor is we don’t know how what’s going on in Ukraine affected Usyk. Has it inspired and motivated him, or is it causing him trouble and emotional turmoil? No one really knows.” After a lifetime in boxing, the Ukrainian-born promoter believes that Usyk has the mental fortitude to still win this fight. “But based on Usyk’s successful professional and amateur career, he has the mental strength to be able to deal with challenges. I think that he will be able to compartmentalize what’s going on in the Ukraine and the professional task of being successful in the ring.”

Since 2019 Joshua has earned a 2-2 record. A loss and a win against Andy Ruiz Jr., a loss to Usyk, and his last victory was in 2020 against Kubrat Pulev. “Even in his last win against Pulev he looked okay, but he did not look great and did not look like the old AJ,” Salita said while speaking in an interview with BoyleSports Boxing, “AJ is athletically very gifted and a hard worker and did the best he can with what he’s got. But I believe that skill-wise and boxing knowledge wise these are two different athletes.”

After the fight, Salita is looking to set up Joshua to face WBO number 11 ranked Jarrell Miller. “Jarrell Miller needs maybe one more fight to be ready for Joshua,” He said, “I saw Eddie [Hearn] say that Joshua will fight in December regardless whether he wins or loses. Obviously there’s a lot of bad blood between Jarrell and AJ, they were originally supposed to meet at Madison Square Garden, but I do think that Jarrell would go to the UK for this one, and I would love to make it happen. AJ v Jarrell, unfinished business, that could be the title of the fight. It’s the perfect fallback plan if Usyk wins and Joshua needs a monstrous comeback fight in December with global appeal.”