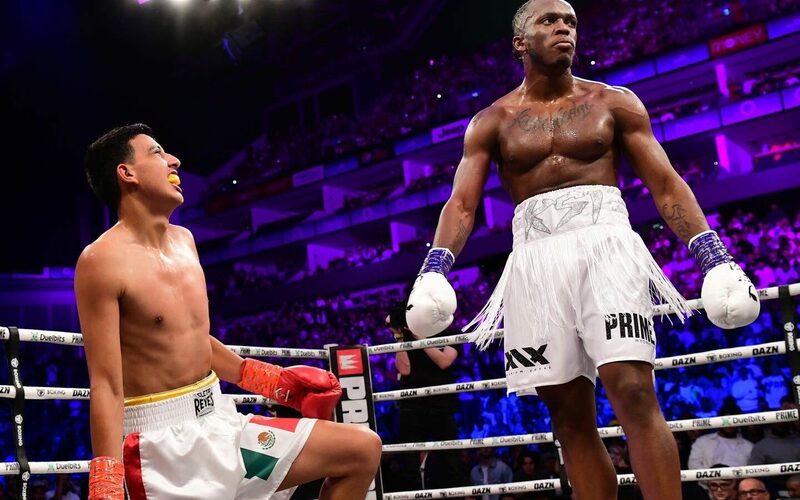 KSI will open the show live on DAZN PPV in a three-round bout against Swarmz. In what will be KSI’s second professional fight, he aims to find his first knockout against a man who started boxing just twenty days ago.

KSI vs Swarmz Opens the Show

The show continues as Deen The Great meets Evil Hero. Both with prior boxing experience—including an appearance in BKFC from Evil Hero—you will see a higher level fight than you might expect from the bottom of an influencer boxing card.

Third on the night is Sam Hyde vs IAMTHMPSN. The only heavyweight bout on the card seems an interesting one. Sam Hyde went viral for his insane antics at the press conference. He will need to transfer that same energy into the ring because with 260 pounds on either side of this matchup, it’s unlikely to go the distance.

Next on the running order is Salt Papi vs Andy Warski. Salt Papi impressed in his last outing, and he seems to have built upon that if his open workout is anything to go by. He has dropped much of the fat from his frame, improving the speed on his already fast hands. Andy Warski has made some big promises ahead of their meeting. Can he deliver?

King Kenny will face FaZe Sensei in what many are tipping to be Fight of the Night. Both have a single boxing match under their belts but Sensei’s wealth of combat experience in other disciplines could be the difference between them. Kenny will look for redemption after his decision victory over FaZe Temperr earlier this year was overturned.

Someone’s 0 has got to go. Deji and Fousey both look for their first win. Four fights between the pair hasn’t been enough for either to see success in the ring. Deji’s disastrous cardio problems have plagued him in his first three bouts. Fousey having no idea how to box was his downfall in the past. Whoever has solved their problem will likely be victorious here.

Slim Albaher steps in on just two weeks notice to fight FaZe Temperr in the co-main event. Already 3-0 as a boxer, Slim has the advantage in experience despite his lack of a full camp in preparation for the bout. A clash of styles and personalities, Temperr has been laid back while Slim has spent fight week calling his next hundred shots.

KSI vs Pineda Will Close the Show

The main event of the evening will see KSI take on Luis Alcaraz Pineda. Both of KSI’s bouts for the night have been put together on short notice following Alex Wassabi’s dropout. Pineda’s record of 2-5 may not be spectacular, but it does mean KSI will compete against a professional boxer earlier than Jake Paul—his end-game opponent. KSI comes in as a heavy favourite, and the timidity shown by Pineda at the weigh-in makes it clear why.

The event can be viewed live on DAZN PPV. The results below will be updated as the fights happen.