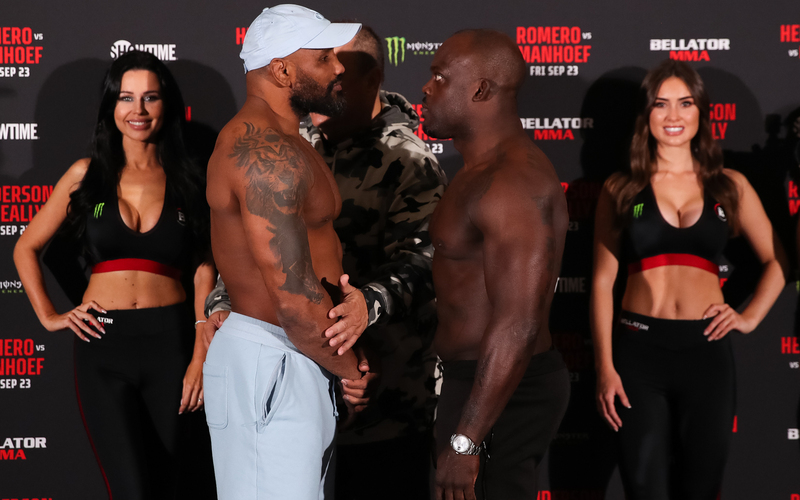 After over a month off, a promotion is back in action for MMASucka staff picks.

Later today, September 23, will see Bellator 285, also titled as Bellator Dublin, set to take place from the 3Arena in Dublin, Ireland. This marks Bellator’s second visit to the Irish capital this calendar year and their eight Ireland event in promotional history. The main card will begin at 4:00pm ET (1:00pm PT) live on Showtime.

Results from all of Bellator 285: Henderson vs. Queally will be available here at MMASucka.

Stay tuned this upcoming Tuesday the 27th as Dana White’s Contender Series 56 will wrap up the promotion’s 2022 season.

Lightweights (155 pounds) Benson Henderson and Peter Queally both look for momentum as they will settle the score in the night’s five-round main event.

Henderson, former WEC and UFC lightweight champion, still remains in peak form through his near 16-year professional mixed martial arts career. A win over the 19-fight win streak of Islam Mamedov in January stopped a promotional skid of three straight losses as the MMA Lab talent looks to now climb his way up towards a shot at gold. Henderson’s opponent, Queally, will have the crowd advantage fighting in his Irish backyard as well as under the likes of Dublin’s SBG Ireland. He will look to rebound after falling short of capturing the division’s vacant championship to Patricky Pitbull in November of last year.

In the co-main event, combat veterans Yoel Romero and Melvin Manhoef in the light heavyweight division (205 pounds) as they cross paths for the first time. The two fan-favorites combine for a total of 91 years old and remain two of the most dangerous athletes on the roster.

Former UFC title contender and world class freestyle wrestler Romero looks to back up his first promotional win over Alex Polizzi in May after a final-second knockout in the third round. The year elder Manhoef, a 50-fight MMA and 52-fight kickboxing veteran, hopes to secure his first win since finishing Yannick Bahati in October of 2019.

See our Bellator 285: Henderson vs. Queally staff picks below. 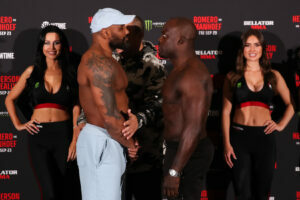 Yoel Romero (left) and Melvin Manhoef at weigh-ins ahead of their Bellator 285 fight taking place Friday, September 23rd from the 3Arena in Dublin, Ireland (photo credits to Bellator MMA).