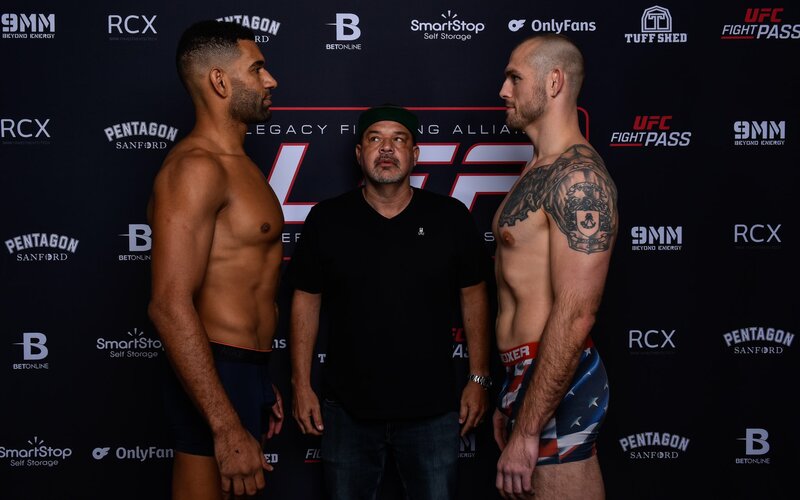 In the main event, former Titan FC middleweight champion and LFA middleweight title challenger Bruno Assis makes his first trip up to light heavyweight to face fellow Dana White’s Contender Series veteran Jesse Murray. The 30 year old Brazilian Assis holds a Brazilian Jiu-Jitsu black belt, and consistently looks to bring the fight to the ground for a finish by submission. In his most recent fight at LFA 127, he had a three-fight winning streak snapped in a first-round TKO loss to Ozzy Diaz for the middleweight championship. Ohio’s Murray, meanwhile, makes his promotional debut having won four of his last five, with his only loss in the stretch coming to Caio Borralho on the Contender Series last year.

The co-main event is a women’s flyweight bout, as 2019 ADCC North American Trials winner Jena Bishop looks to keep her undefeated MMA record intact against the debuting Olivia Beeskau. After a decorated grappling career, Bishop made her MMA debut one year and one day ago, and has picked up three wins since. Beeskau is 1-1 in her professional MMA career, and will look to regain a winning record after suffering her first professional loss just over a month ago.

Also on the card is a pivotal flyweight matchup between young prospects Tyus White and Miguel Sanson, a lightweight showdown featuring Kegan Gennrich and Jake Kozorosky, and a welterweight tilt pitting Scott Writz versus Craig Fruth. The preliminary card will be headlined by a flyweight battle between Cody Linne and Payton Brezinski.

Now that the #LFA145 weigh-in is in the books, which fight are you looking forward to most?

Bruno Assis def. Jesse Murray via Submission (Armbar) at 4:11 of Round 1

Jena Bishop def. Olivia Beeskau via Submission (Rear-Naked Choke) at 2:02 of Round 1

Kegan Gennrich def. Jake Kozorosky via Submission (Armbar) at 2:59 of Round 2

Rachel Martinez def. Diamond Long via TKO (Elbows from Crucifix) at 4:00 of Round 2