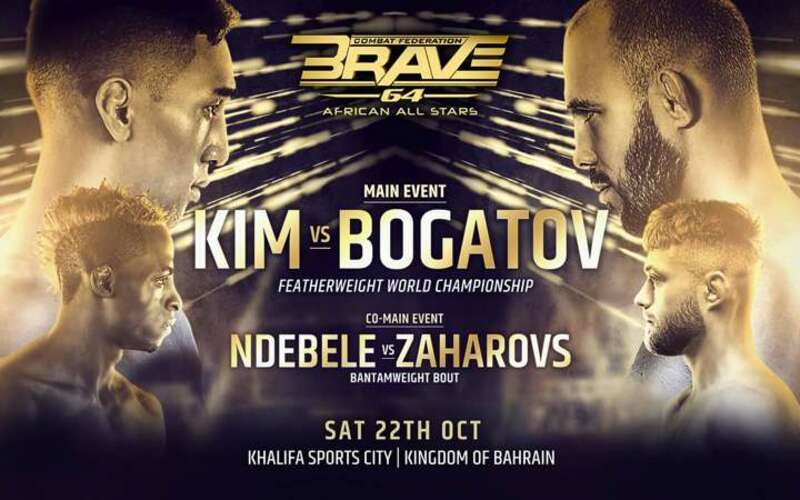 The event will emanate from Khalifa Sports City Arena in Isa Town, Bahrain, and is set to be headlined by a vacant featherweight title fight.

Fight fans can catch BRAVE CF 64 streaming live and free on the BRAVE CF website beginning at 11 a.m. ET/8 a.m. PT. The show will also be available to subscribers of DAZN.

Saturday’s main event will see South Korean featherweight prospect Tae Kyun Kim (9-0) battle Russia’s Roman Bogatov (12-1). Bogatov debuted in the UFC on the inaugural Fight Island card, UFC 251, as a 10-0 unbeaten prospect in his own right. He proceeded to have two points deducted for fouls and lost his debut to Brazilian Leonardo Santos. From there, the UFC cut ties with Bogatov, but the Russian has since joined the ranks of BRAVE and holds a 2-0 record in the promotion, winning by way of unanimous decision in both outings.

Bogatov will look to get his first taste of BRAVE gold when he takes on Kim, a four-fight BRAVE veteran. Kim is a well-rounded mixed martial artist who owns three decision victories and one knockout in the promotion. He will look to stave off Bogatov’s pressure-intensive style en route to the first professional championship of his young career. Additionally, while both fighters are built to go the distance, Saturday will mark the first time Kim has been scheduled for five rounds. Bogatov, the former M-1 lightweight champion, has gone the full 25 minutes on multiple occasions.

The clash between Bogatov and Kim will be preceded by three professional fights, with a bantamweight co-main event between Nkosi Ndebele (5-1) and Matiss Zaharovs (4-2) getting cancelled in the hours leading up to the event. Instead, an amateur light heavyweight fight between Israel Mano and Remy Serge will open the show.

Other fights on this weekend’s BRAVE card include a middleweight fight between another South African in Mzwandile Hlongwa and Russia’s Abusupyan Alikhanov, in addition to a super welterweight contest between South Africa’s Brendan Lesar and Zagid Gaidarov of Bahrain. Omar El Dafrawy, a 5-2 Egyptian fighter, will take on Switzerland’s Kevin Ruart at 170 pounds.

Zagid Gaidarov def. Brendan Lesar via Submission (RNC) at 1:24 of Round 2