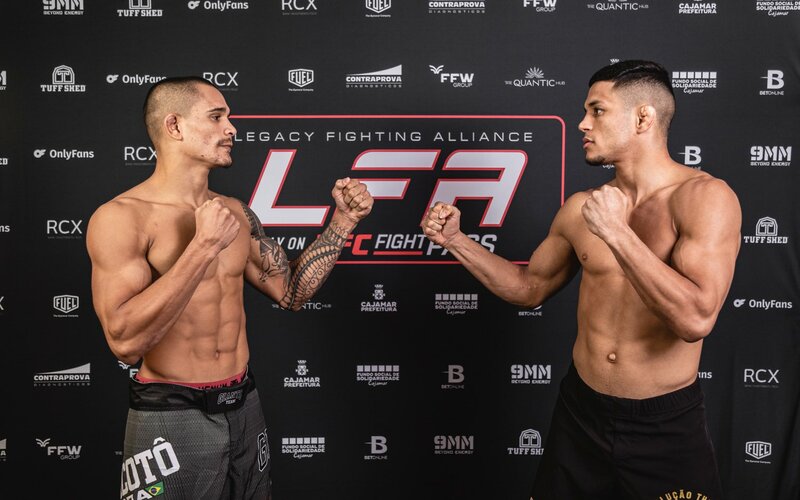 LFA returns to Brazil for a loaded card headlined by two exciting fighters. Marcio Barbosa and Gabriel Santos have a combined record of 21-1 with 13 finishes. Barbosa was knocked out in his one loss and of course Santos has never been finished, it will be interesting to see if this bout makes it to the judges’ scorecards.

Now that the #LFA146 weigh-in is in the books, which fight are you looking forward to most?

For Barbosa specifically, he has had 3 fights this year, all of which were victories for him coming by way of stoppage. He is definitely riding a hot hand as he heads into tonight’s bout.

In the co-main event, veteran Felipe Douglas and Rangel de Sa face off in another very entertaining matchup. Douglas enters the night with a record of 20-5 and has fought in promotions such as Shooto Brasil, XFC and Titan FC. He also has five stoppage wins on his record, all of which came via knockout. Against Douglas is de Sa who comes in with a record of 11-2 at just 26 years old, with his most recent loss coming to recent UFC signee Ismael Bonfim at LFA 111. An impressive win here could perhaps propel him into a Dana White’s Contender Series shot or something else significant inside the LFA promotion.

Gabriel Santos def. Marcio Barbosa via TKO (Head Kick and Punches) at 0:09 of Round 2, advances to LFA Featherweight Tournament Final

Carlos Prates def. Moacir Rocha via TKO (Head Kick and Punches) at 4:15 of Round 1

Danilo Adreani def. Yan Teixeira via Submission (Crossface) at 2:46 of Round 2

Julia Polastri def. Bianca Sattelmayer via TKO at 0:51 in Round 3

Reginaldo Junior def. Marcos Zinhani via Submission (Rear Naked Choke) at 2:21 of Round 1

Levi Rodrigues def. Leonardo Genuino via TKO at 2:32 of Round 1

Manuel Robson Minoto def. Allan Oliveira via TKO at 0:21 of Round 1

Gabriela Fujimoto def. Gabrielle Campelo via TKO at 2:37 of Round 3